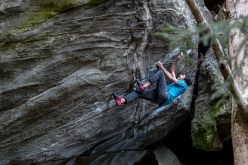 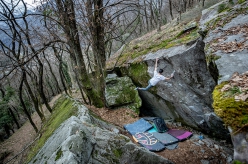 Paul Robinson making the second ascent of Murder One, V12/8A+ at Cevio in Switzerland
Photo by Paul Robinson archive 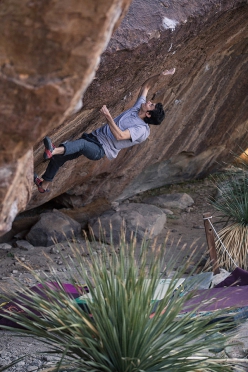 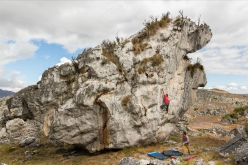 Paul Robinson making the first ascent of The Elaborate Ruse V11 (8A) in Zimbabwe.
Photo by Paul Robinson archive

Interview with American rock climber Paul Robinson who recently managed to climb his 1000th boulder problem graded 8A or harder.

1000 boulders 8A or harder. Let's just run that past you one more time to make it sink in: one climber, one thousand problems, from 8A to 8C… The accomplishment defies the imagination and is almost incomprehensible, yet it is precisely what American rock climber Paul Robinson achieved just the other day. The 32-year-old pro climber was thrust into the international limelight in 2010 with his ascent of Lucid Dreaming at the Buttermilks at Bishop, and over the past decade he has been quietly amassing a tally which, in all likelihood, has no equals.

Paul, 1000 x 8A or harder. That’s mind blowing. Both in terms of difficulty, and also the sheer number. Let’s start with a technical question: how do the grades break down? And how many of there were first ascents?

Tell us about it
My very first one was The Egg in Squamish. I was around 15 and had seen the video Rampage, where I believe it was Chris Sharma who climbs the boulder. I was lucky enough to get to go on a trip there with my dad over summer break from school. At 15, I was doing decently well in competitions and outside climbing. I had a few sponsors but nothing really that promising. It was around that time that I really began to learn my body and become a much better climber. Just like any first of the grade, I was ecstatic to have completed it!

You made headline news in 2010 with the first ascent of Lucid Dreaming. How important was that problem and why?
Yes, this boulder was huge for me. I had previously climbed the 2nd ascent of Terremer, V15 in Hueco and become the first American to flash 8B. This climb felt like a step above that. I knew at that point that I could become one of the best in the world if I kept at it. I was beyond motivated to keep training and to try to push myself to be one of the all time greats in bouldering.

Are there any other problems that were really important to you during this "Race to a thousand"
I think climbing The Story of Two Worlds in Switzerland was really huge, too. This was back in 2011 and was a huge stepping stone for me on the international climbing scene. It was a super hard boulder and I think with that Europe trip, where I climbed many hard boulders between 8A and 8C, it showed the rest of the world that I could climb some of the hardest boulders worldwide, not just in the USA.

What boulder cost you most in terms of time and energy? And which were the most satisfying?
Hypnotized minds put up by Daniel Woods in the Rocky Mountain National Park… I have yet to send it, but it is a dream of mine to complete it. The most satisfying were some of my first ascents. The time and energy it took and the shear joy of not only realizing it could be climbed but then actually climbing the boulder is and was pure bliss!

You said before that about 20% of these 1000 problems were first ascents. How important are first ascents in your mind? And early repeats?
To be an all around climber, first ascents are super important but so are early repeats and repeats all around. To be one of the best you really have to do a bit of it all, climb your own fa’s and also repeat other hard test pieces. I have made it my point to concentrate on all of this throughout my climbing career in order to become the most well rounded climber I could be.

So how hard is 8A for you nowadays? I mean, is it comparable to a warm-up or do you still have to dig in? And what about harder?
I had a friend ask me a similar question recently. When I am feeling quite fit, 8A I usually flash or something I can do in a few goes. 8A+ usually takes a few tries if in my style, maybe a bit longer if not. 8B is where it definitely starts to get difficult for me. Some that are in my style I can do quickly but hard ones or ones outside of my style usually take me a day or maybe 2 to complete. 8B+, if I do it in a day I am really psyched, 2-3 days is more common. 8C, if I do it in a day is probably not 8C then hahaha!! I think 8C is damn hard. It usually takes me a few days to get some good links and then a few more to put it all together. If an 8C is out of my style range, there is definitely a possibility I just don’t have the ability to climb it.

1000 boulders. But what about sport climbing. Surely there’s been space for that, too?
Haha of course. I wanted to climb 9a a while back and made the second ascent of Psychadelic, 9a in St George. A few years later, a 9a+ caught my attention, Jaws II in Rumney. I managed to climb this one, too. The experience was fun, but working a climb on a rope just is not that enjoyable to me. I much prefer the freedom of working a boulder from the ground. However, there’s La Capella, that 9b at Siurana in Spain… I have considered going to check that one out some day!

After all these problems: what, if anything, surprises you in bouldering now?
Its uniqueness.  I just love how every climb is so different. I never get bored of how incredibly unique climbing is!

So are you as keen now as you were before?
Absolutely. Throughout the years my psyche has gone up and down, but right now I finally feel like I have found a really good way to train and prep for the big trips I have ahead. I am psyched to get back to Switzerland for unfinished business, unfortunately my trip was cut short by Covid but I am amped for the trips to come! I would really love to still climb a confirmed 8C+.

Of this 1000 x 8A or harder experience, what stands out most?
To me the moments that stand out the most are some of the first ascents that I have done. Some were not the hardest, but they were in some of the most beautiful places in the world. Spending so much time in South Africa for example, at the area I developed called Three Corners, there are lines there that I will never forget. Some of the best days of my life for sure.

Well today was the day! I finally accomplished my long term goal of climbing 1000 boulder problems 8A/V11 and harder! Wow what a journey it has been :) so thankful to all of the amazing people that have been a part of this wild ride. Today I managed to send 999 and 1000 with two V13’, Muscle Car High and Get Laid. Super close on the full muscle car and a cool new line out right. So amped, feeling strong and motivated. Can I do another 1000!? #bouldering video: @pdrizzll great day out