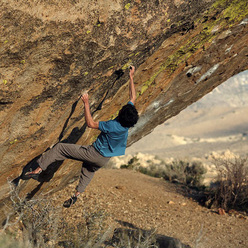 After Daniel Woods and The Game last month, it's now his compatriot Paul Robinson who has climbed a boulder and put forward the amazing grade V16/Fb8C+. The problem is called Lucid Dreaming and is an explosive sit down start to the highball problem Rastaman Vibration at the Buttermilks close to Bishop, California, USA.

The 22-year-old student of Fine Arts at the University of Colorado had begun attempting the problem in earnest in April 2008, but only yesterday did he manage to stick the polished pinch and long dyno. Success came about after a restless night which saw him check out the weather forecast at 4.30am and then dash to the problem before the rains set in. Wills Young, author of the local climbing guide and without a doubt one of the reference points for bouldering at the Buttermilks, stated "Certainly one of the most amazing ascents at the Buttermilks ever, and one of the world's hardest problems."

In the past Robinson had sent both Jade (V15, Daniel Woods at the Rocky Mountains National Park) and Terremer (V15, Fred Nicole at Hueco Tanks) and he has dedicated his recent success to his father who passed away recently and who was instrumental in instilling this overwhelming passion for climbing. Check out the video introducing Paul Robinson and his climbing below.

Paul Robinson: Inside The Climbers Guild