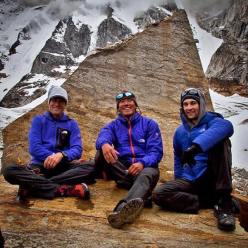 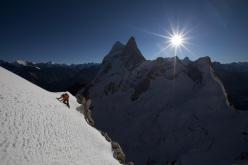 Jimmy Chin: adventure in a photograph

Jimmy Chin is a mountaineer, photographer and filmmaker. He has taken part in countless expeditions around the world, has skied Everest, established a host of new big walls of the United States, the Alps and the Karakoram and was awarded the Outside Magazine Adventurer of the Year in 2012.

Chin fell in love with the mountains when he was twelve, while on holiday with his family in Glacier National Park. He became a photographer almost by accident, when a friend of his showed his photo of of El Capitan to a company specialized in clothing for climbing and the outdoors. His photographs have been published in magazines such as National Geographic Adventure, Outside Magazine and many others. His latest film, MERU, won the Sundance Festival Audience Award and opened the fortieth edition of the Banff Mountain Film Festival. We met him in the Canadian town to discover some of his secrets…

Jimmy, what did your expedition to Mt. Meru add to your life as adventurer?

Meru was certainly one of the toughest expeditions I’ve ever been on. I had to rely on everything I've learned over the past twenty years and apply it to climb this mountain. Really, everything I’ve ever learned, both physically and mentally. This climb has fortified my idea that, when dealing wit a real challenge, taking things one step at a time and believing in the impossible are the key elements to success.

What are the main difficulties you encounter when, as for Meru, you’ve got a great story and you need to translate it into a movie plot?
I wanted to share various different issues in this film. The biggest challenge was making a film that could combined all these issues clearly, that progressed fluidly.

So what are the key elements for successful storytelling?
A clear story, good rhythm, competent use of the narrative structure, always bearing carefully in mind when to reveal something and to what extent.

Rick Ridgeway was an important mentor for you: what were his most important teachings?
Once, very early on in my career, he told me “Commit yourself and act." I’ve always tried to put these words into practice. No one will ever achieve your dreams for you, so it’s up to you!

Photography and social media: what do you think about this era of sharing things, of selfies and filters?
I think that social media represent a great tool to share one’s own work. In many ways they have made photography far more democratic and have motivated professional photographers to do better. To some extent it was shocking, but I believe we need to adapt to the times, otherwise the risk becoming dinosaurs and dieing out.

You're famous for your strong sense of composition: can you share three tips to make a good photo?
First of all, the rule of thirds. Looking for the balance within an image is always a good starting point. Understand what the photo’s main subject is and where to place can be decisive in making the photograph more static or more dynamic. Examine the work of photographers you love most and ask yourself why you like their pictures. This will help you understand the specific criteria you’re after when creating your own images.