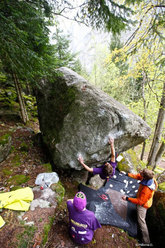 When: 5 - 8 May 2011
Where: Val di Mello / Val Masino (Valtellina, Sondrio) Italy
What: the world's biggest international bouldering meeting
Who: for boulderers from across the globe
What for: climb on the numerous boulders dotted across the valley floor
Organisation: Associazione Operatori Val Masino

More than 2200 people have pre-registered for the 8th Melloblocco, the world's biggest climbing and bouldering meeting due to take place in Val Masino, Italy from 5 - 8 may 2011.

Less than 8 days to go before Melloblocco 2011. And while the game of who will be there and "I'll be there too" is working its way through the web, the various forums and social networks, more than 2200 people have pre-registered for the 8th edition of the world's biggest climbing and bouldering meeting. Climbers have registered from all over Italy but also as far afield as Mexico, Kuwait, Malaysia and Iran to name but the most "exotic". One thing is certain: as always lots and lots of climbers will gather in Val di Mello. All of them will be ready to climb as much as possible. But they'll also be there to meet up, party, discuss the evening videos. And dance to the beat of the numerous improvised jam sessions dotted amongst the valley boulders.

They'll be a plenty, all happy to be there. There'll be the champions, like the magic elf Adam Ondra who recently raised the bar once again, beating not only the arithmetics but also the algebra of climbing grades. And there'll also be mister Chris Sharma, the blond American climber who, with his imagination and smile, has not only fuelled the dreams of climbers worldwide but also helped the game of climbing progress in all fields. Chris the great, Adam the phenomena, for the first time together at the Melloblocco: a spectacle within a spectacle. Also because they'll be in great company.

All will, once again, mingle in the sea of other Melloblockers with whom they'll share - as equals - the thousands of problems the Val di Mello has to offer. They'll climb above all on the new problems ideated, cleaned and "dished up" as usual by "maestro" Simone Pedeferri. These   join the historical valley problems and the numerous new ones which, for the last seven years, the Melloblocco has created. This too is a part of the "small heritage" left behind by the great bouldering meeting. As well as the feeling of closeness and respect for the great and unique stars of the event: Val di Mello and Val Masino, with their forests, incredible boulders which seem to have fallen from high above, the meadows and sky which all render the climbing and the Melloblocco truly great.

The date for everyone's diaries is in Val Masino from Thursday 5 to Sunday 8 May to climb, celebrate the International year of the Forests and, above all, do it all together.

The Melloblocco is open to all and climbers can pre-register on the official website www.melloblocco.it