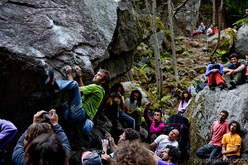 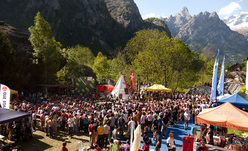 The prize giving ceremony of Melloblocco 2011
Photo by Klaus Dell'Orto 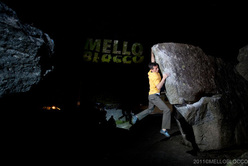 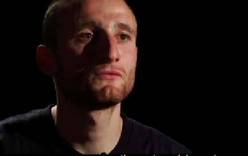 When: 5 - 8 May 2011
Where: Val di Mello / Val Masino (Valtellina, Sondrio) Italy
What: the world's biggest international bouldering meeting
Who: for boulderers from across the globe
What for: climb on the numerous boulders dotted across the valley floor
Organisation: Associazione Operatori Val Masino

Great success and absolute record number of participants in Val Masino - Val di Mello (Italy) during the eighth Melloblocco, the biggest climbing and bouldering meeting in the world. 2600 registered climbers from 22 different countries took part in the event, while at least 10000 people gathered in the valley.

Never before had there been so many. So many to exceed all expectations. Already on day two they had broken all previous records - not only for the biggest bouldering and climbing meeting in the world - but also for Val Masino and Val di Mello itself. The Melloblockers never stopped trundling in. They continued to reach the valley relentlessly, yesterday evening just like on this sun-blessed Sunday morning. And so today, beneath the clear valley of wonders skies, 2600 registered Melloblockers climbed up thousands of boulders. While at least 10,000 people joined them in the valley. Predominantly young and extremely young climbers but,as tradition has it, there were also plenty of children and their families, too.

It really was a special Melloblocco. Impressive to say the least, not only due to the record numbers. It was impressive also because, despite the mass of people, there was never any overcrowding. The shuttle buses laid on by the organisers continued to drive from one area to the other and the Melloblockers continued to use them, leaving their cars in the car park. This respect for nature is the hallmark of the event, the underlying spirit of the Melloblocco. It comes as no surprise therefore that 2011 was dedicated to the International Year of the Forests.

It has to be said that Val Masino really is something quite particular. A beautiful valley of wonders. Everyone found their corner of climbing happiness somewhere amongst the boulders and the meadows in Val di Mello, on the problems littered in the enchanting Bagni di Masino beach forest (a magical display of light), between the Remenno rocks and the thousands of boulder problems in the Masino area. There were numerous climbing champions, many highly talented climbers and also plenty of beginners. And also lots of children taking part in the Mello Baby event and climbing with the disabled, in collaboration with the Sondrio-based ANFFAS and CONI. All were united by the same love for bouldering, for climbing and nature which, in these valleys and mountains, is truly fantastic. It was impossible not to be taken in by so much beauty. Just like it it was impossible - for those who love climbing - not to take part and be a protagonist of the Melloblocco and its happy festive atmosphere.

The classic Melloblocco party on Saturday evening was a case in point. The celebration was held last night at the Mountain Centre, the logistical heart of the event. Thousands gathered here for the party. Some let themselves be transported by the rhythm of the African drums whose beat could be heard all day long. Others danced freely to the Circo Abusivo music, while others continued to climb on the incredible interactive boulders made of light and sound like in some sort of video game, only that here it was all completely real. And there were some who attempted the impossible dynos into the dark of night. Yes, yesterday evening the entire valley celebrated the happiness felt for Melloblocco and climbing in general.

This morning it all began anew. Naturally by climbing up the valley boulders. The Melloblockers lugged their crash-pads (the mattress designed to soften their falls) and began the game once again. The special competition proved a show within the greater spectacle, up the extremely difficult boulder problems. Many of the best climbers in the world tested themselves on the eight problems set for the men and women. These included "the king" of climbing Chris Sharma from the USA and the Czech "wizard" Adam Ondra, as well as calibre athletes such as the Italians Gabriele Moroni, Mauro Calibani, Michele Caminati, Roberta Longo. And Nina Caprez from Switzerland, Muriel Sarkany from Belgium, James Pearson from Britain, Barbara Zangerl from Austria and Spaniards Patxi Usobiaga and Daila Ojeda.

In the end, 5 men each sent 5 problems: unstoppable Adam Ondra, ace Italian Gabriele Moroni, the legendary Italian boulderer Mauro Calibani, Italian Michele Caminati on superb form and the extremely strong 20-year-old Anthony Gullsten. British star James Peason sent four problems, as did Melloblocco faithful Riccardo Caprasecca. First place in the women's event was shared by Russian Alexandra Balakireva and Austrian barbara Zangerl, both on great form with 6 tops. Roberta Longo from Italy proved her worth too and finished third with 4 tops. The prize money was split equally amongst men and women. Unfortunately this "equality" isn't always the norm and this is yet another distinguishing feature of the special Melloblocco spirit. The same spirit which will return again next year, naturally in Val Masino, the magnificent bouldering and Melloblocco valley.