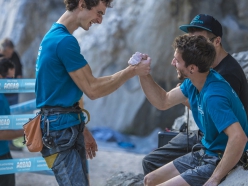 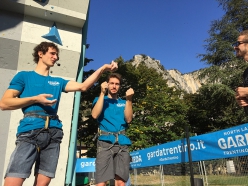 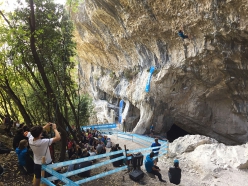 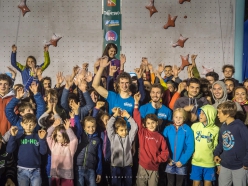 Adam Ondra, Stefano Ghisolfi and those that took part in the Champions Challenge at the Arco Climbing Stadium on Saturday 13 October 2018
Photo by Archivio Garda Trentino ph. G.P. Calzà

Adam Ondra, Stefano Ghisolfi and the special sense of climbing at the Arco Champions Challenge

On Saturday 13 October 2018 Adam Ondra and Stefano Ghisolfi took part in the Champions Challenge at Arco (Garda Trentino, Italy). Open to all, this was a day with the two champion athletes, at the Climbing Stadium and at the crag Pueblo di Massone.

That special sense champions have for climbing is hard to grasp. Sometimes, however, one can try to comprehend it. Take Adam Ondra and Stefano Ghisolfi for example, and their day last Saturday at Arco. The full-blown programme began early in the morning at the Climbing Stadium, continued in the afternoon through the overhangs at Pueblo di Massone, and ended at night back in the Climbing Stadium. A vertical journey between the artificial climbing wall and real rock. A Challenge led masterfully by Simone Raina and at the same time an opportunity to find out more about these two phenomena of modern climbing.

The event, that could well be described as a gamble, paid off. Actually, we’re certain that all those who took part (and there were many) in this free-flowing "typical day" of the two champions were not disappointed. Because of what they proved while climbing: the preparation of the parallel routes at the Climbing Stadium, the on-sight tests at Pueblo (on the fantastic new sport climbs Alcatraz and Armageddon) and then the beautiful "race up plastic" on the 8b+ set by Cristian Brenna and Severino Scassa, certainly didn’t disappoint the 400-strong crowd.

But obviously the day offered a lot more For example, all those things that Ondra and Ghisolfi said about their climbing. Some decidedly new, others worth highlighting. For example, Ondra explained that he cannot train - i.e. climb - for more than 5 hours a day. So, in order to "optimize" the time he ins’t actually physically climbing, he climbs the routes in his mind, reproducing the moves of his vertical challenges.

And as proof of how important these "visions" alias "obsessions" are, along came the immediate: they both mimed the parallel route they’d just attempted with their eyes closed. This impromptu demonstration was joined by another off the cuff performance later that evening as they warmed up on the speed route - notoriously not their strong point and for both of them one of the fundamental obstacles to the Tokyo 2020 Olympics. Well, not only did both play along and have fun, but Ondra also made Ghisolfi try a new start called the "Tomoa skip", invented by talented Japanese boulderer Tomoa Narasaki. Ondra reckons the route becomes 7b (instead of the 6c with the classic start), but the new move makes you decidedly faster.

Ghisolfi was great man at supporting Ondra. But also great at demonstrating how the two of them - bound by an obvious friendship and genuine esteem - are sincere. Ondra always seems to aim for immeasurable goals with complete confidence, while Ghisolfi seems in search of a wise balance. Ghisolfi explained that he needs the right balance between tension and tranquility. The right harmony for those illuminating moments that have made him one of the men to beat on the international competition circuit. And it takes a lot of passion to have fun like they did at this Arco Climbing Challenge. Here perhaps lies this "special sense for climbing" of these two champions: in their infinite love for climbing!

11.10.2018
Champions Challenge: Adam Ondra - Stefano Ghisolfi interview before Saturday showdown
Double interview with Stefano Ghisolfi and Adam Ondra who on Saturday 13 October 2018 at Arco di Trento (Garda Trentino), Italy, will take part in the Champions Challenge. This event is open to all; from the Climbing Stadium artificial wall to the historic Massone crag, this promises to be a day of climbing, fun and friendship.

21.06.2018
Stefano Ghisolfi makes excellent Erto debut
At his first visti to the Italian crag Erto, Stefano Ghisolfi onsighted Tucson 8a, Bricolage 8a+, Super Pole Position 8a+ and Jurassic Climb 8b+.