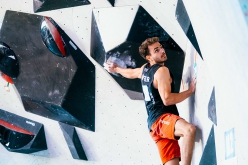 Yannick Flohé on his way to winning the fifth stage of the Boulder World Cup 2022 in Brixen, Italy
Photo by Lena Drapella / IFSC 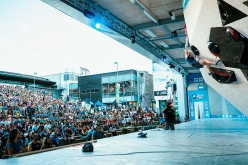 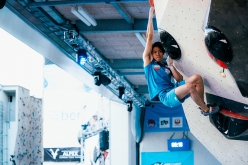 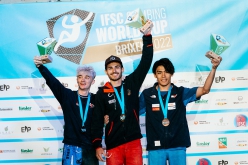 After Natalia Grossman’s victory on Saturday night, the fifth stage of the Boulder World Cup drew to a close last night in Brixen, Italy, with the highly hard-fought men’s final in the splendid Vertikale Climbing Stadium. 6 athletes representing 4 different nations competed for the top spot and it was combined world champion Yannick Flohé who - after having dominated both the qualifiers and the semis - really set the arena on fire with his 2 tops and 4 zones. Silver-haired 21-year-old Maximillian Milne from Britain placed second after securing the only to on problem #2 and, with a score of 2 tops and 4 zones, won the medal that matched his hair colour. 2019 Boulder World Proof of how difficult the problems were came from 2019 Boulder World Champion Tomoa Narasaki from Japan who came in third with just 1 top and 4 zones.

Flohé shook the stadium to the corre on problem #1, from the first block, sending it third go after Meichi Narasaki had needed 2 attempts and Milne just 1. Problem #2 proved impossible for everyone except for Milne who, uplifted by the crowd, topped out fifth go. Flohé needed to do something special to keep in the running and problem #3 proved to be his Mesiterstuck: where everyone else failed, he topped out second go. A zone on problem #4 secured overall victory, as Milne failed to make any headway whatsoever here.  "The final went really well - explained Flohé - topping out on #1 gave me a lot of energy, while on #2 I battled hard but failed. Then I surprised myself when I did the third problem which wasn’t my style at all. I really think that 3 is my lucky number, I don't know why! While on the last problem I wasn't very sure what I was doing". Britain’s Milne stood on his first World Cup podium, too."It was intense and fun. I don't even know how it happened, I think thanks to some strange magic. The crowd was magnificent, and it’s here in Brixen that I won bronze at the European Youth Championships. Now another podium, fantastic."

Japan’s Narasaki never gave up trying and battled to the dying seconds of each 4-minute slot. ”It was really difficult, the boulders were very tough. I was also particularly tired after the semifinals. That's why I didn't manage to reach all the tops, but I'm happy anyway.” stated Narasaki. 19-year-old Dohyun Lee from Korea settled for fourth place, in what was the first final in his career. The provisional leader of the 2022 Boulder World Cup Yoshiyuki Ogata had to make do with fifth place, while Meichi Narasaki, Tomoa’s younger brother, finished sixth.

It was late in the evening when the spotlights were turned off at the wonderful competition venue, while the music continued to play in the background celebrating the long World Cup weekend organised by the local AVS committee and the Italian Sport Climbing Federation. Organiser Ralf Preindl expressed his satisfaction: "The result is certainly positive, from Friday to Sunday a lot of people came to enjoy the competitions". The success of this event is also thanks to former Lead world champion Alexandra Ladurner: "Everything went well and a huge shout out goes to the 150 event volunteers, all wearing their cool new blue shirts.”

The World Cup continues in Innsbruck, Austria, from 22 to 26 June. As to the future of Brixen, it’s still to early to discuss it. Enjoying the spectacle from the stands was IFSC president Marco Scolaris, who most certainly will have understood how efficient the Brixen world cup organisation is.