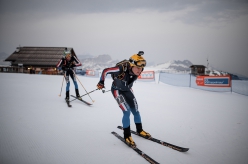 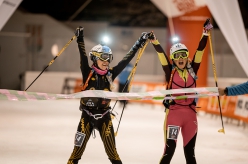 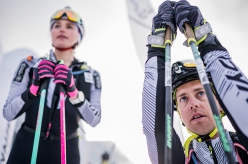 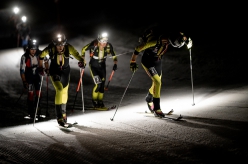 2 hours 56 seconds and 59 miliseconds set by Filippo Barazzuol - William Boffelli is still the time to beat on the four Dolomite passes of Campolongo, Pordoi, Sella and Gardena. The dynamic Italian duo who race for the CS Esercito, Michele Boscacci from Albosaggia, Valtellina together with Matteo Eydallin from Sauze, Piedmont, won the 2022 edition finishing one of the most popular night time ski mountaineering races over 42 kilometres and with a vertical height gain of 2700 metres in the time of 3h03’03”.

Theirs was an amazing race due to the fierce competition in which teams such as Alex Oberbacher - Davide Magnini (second in 3h05’51”) and Jakob Herrmann - Christian Hoffmann (third in 3h06’02”) stood out. The race’s top five was completed by Daniel Ganahl-Paul Verbnjak fourth in 3h07’49” and Filippo Beccari – Martin Stofner fifth in 3h16’14”. Right from the start the strongest couples pushed the unsustainable pace which enabled the leading group to move away from the rest of the pack. Half way through the race the two army athletes extended their lead to to secure victory.

FEMALE RACE
There was a dramatic turn of events. Spending most of the race catching up the win goes to the expert athletes Katia Tomatis-Elena Nicolini (3h46’56”) who won over the favourite duo Alba De Silvestro - Alessandra Schmid (3h47’31”). Way ahead up to the half way mark, the queen of 2022 night time racing Alba De Silvestro did not manage to win the historic trio (this year she won the Monterosa SkiAlp in Vallée d’Aoste and Mountain Attack in Austria). Up the last ramps the Swiss athlete Alessandra Schmid started to struggle. Her Italian partner  from Veneto, clipped her into the cord and pulled her up, but this did not stop the strong comeback of the Piedmont-Trentino duo. Third place was made up by the Austrian Sarah Dreier - Victoria Kreuzer (3h50’14”).

MIXED RACE
In the special mixed couple race it was the duo Lukas Hiemer (GER) and Johanna Hiemer (AUT) who won with the time of 3h45'53. In second position  Mirco and Paola Pervangher (SUI). And the podium was completed by Martin Kaschmann and Stephanie Kroll (AUT).  Their time was 3h57'00''.

AN ALLURE WITH NO EQUAL
The itinerary? Adrenaline filled, especially on evenings like this one where the clear sky offers priceless sceneries and emotions. The start from Corvara (1535 asl) and the first ascent towards Passo Campolongo and Bec de Roces (2080m asl) is tackled under the natural light of the sunset. Pity that the sustained pace forces the athletes to keep their head down low. Once the first pass has been climbed head lamps are switched on and down towards the second transition area situated right in the centre of Arabba (1605 m asl). The journey continues towards Passo Pordoi (2239 m asl), Canazei, Passo Sella (2174 m asl) and Selva Gardena. From here with tired arms and with energy running low, the difference is made thanks to all the metres of hard training accumulated throughout the season and with the strong wish to end the race. The last ascent towards Passo Gardena (2298 m asl) needs to be tackled before flying down towards the finish line and  glory which will be shared between victors and finishers.

24.03.2022
Sellaronda Skimarathon 2022 begins tomorrow in the Dolomites
After a two-year stop, the Sellaronda Skimarathon will take place in the Italian Dolomites tomorrow. As per usual the most famous night ski mountaineering competition will cross four mountain passes, Campolongo, Pordoi, Sella and Gardena and cover a total distance of 42 kilometers and +2700m altitude gain.

13.03.2022
Pierra Menta 2022 won by Matteo Eydallin - Michele Boscacci and Axelle Gachet Mollaret - Tove Alexandersson
The 36th edition of the classic Pierra Menta ski mountaineering competition in Arêches-Beaufort in France took place from 9 to 12 March 2022 and was won by the Italians Matteo Eydallin and Michele Boscacci. The French-Swedish team comprised of Axelle Gachet Mollaret and Tove Alexandersson won the women's event.

21.02.2011
The Sellaronda hourglass, the winners and the magic of the Ski Alp
On 18 February 2011 Alain Seletto and Tony Sbalbi, Roberta Pedranzini and Francesca Martinelli won the 16th Sellaronda Skimarathon, the great ski mountaineering competition in the Dolomites. An analysis of the magical tour which crosses the passes Gardena, Campolongo, Pordoi and Sella by Lorenzo Scandroglio.

08.03.2010
Sellaronda, one long roller coaster of emotions
On 05/03/2010 the 15th Sellaronda Skimarathon, the historic ski mountaineering race in the Dolomites, was won by Guido Giacomelli and Hansjoerg Lunger ahead of Thomas Martini and Matteo Pedergnana, followed by Ivan Antiga and Trettel Thomas. The womens' event was won by the Weger and Gross. The extenuating and freezing cold race, as recounted in first person by Lorenzo Scandroglio, provided excitement even beyond the race course.

25.02.2007
Sellaronda Skimarathon 2007
Guido Giacomelli and Hansjoerg Lunger, and Roberta Pedranzini and Francesca Martinelli have won the 13th edition of the Sellaronda ski mountaineering competition. 720 athletes competed in this classic night ski mountaineering marathon in the Dolomites, cheered on by an enthusiastic crowd.
03.03.2004
Sellaronda won by Nicolini-Vescovo and Secco-Calliari
Despite appalling conditions the Sellaronda celebrated its 10th anniversary in the Dolomites last weekend and was won by Nicolini-Vescovo and Secco-Calliari