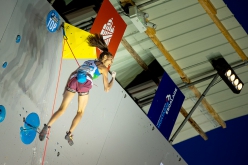 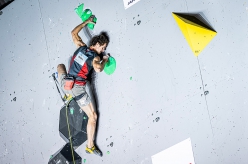 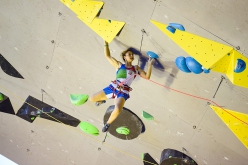 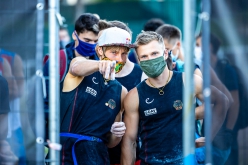 Alexander Megos and Christoph Hanke at the Briançon stage of the Lead World Cup 2020, the first and probably only stage this season due to the coronavirus pandemic
Photo by Jan Virt / IFSC

At Briançon in France Laura Rogora from Italy and Adam Ondra from the Czech Republic won the first and probably only stage of the Lead World Cup 2020. Rogora is only the second Italian woman to win gold in a Lead World Cup stage after Luisa Iovane who won in Yalta in 1989.

This is a historic moment for Italian sport climbing: after months of hiatus because of the coronavirus pandemic, yesterday at Briançon in France Laura Rogora showed her immense talent by winning the first, and probably only, stage of the Lead World Cup 2020. The 19-year-old Roman climber topped out in the final just like the undisputed queen of lead competitions Janja Garnbret had a few minutes earlier, and the two were separated on countback to the Semifinal where the Italian had seemed in a league of her own. Rogora’s first-ever senior Lead World Cup victory had been in the making for a while given her amazing performances in the Youth competitions, but senior competitions are obviously an entirely different ballgame. Just to give you an idea about how important last night was to Italian climbing: the only other Italian woman to have won a stage of a Lead World Cup is Luisa Iovane, who achieved this exceptional result in Yalta back in 1989 when she finished second overall in the Lead World Cup’s debut year.

In the men's competition Domen Škofic dictated the pace. After a "sabbatical" year away from competitions the Slovenian returned stronger and above all more motivated than ever before and set an impressive highpoint two holds below the top. Luka Potocar placed fourth, Mathias Posch sixth, Mejdi Schalck seventh and Nao Monchois eighth, and when Alexander Megos plummeted to fifth place and even Jakob Schubert fell below Škofic’s highpoint, it became clear that the 26-year-old had climbed to perfection.

The only athlete who could do better than Škofic was the last out, Adam Ondra, who demonstrated in front of 5,000 strong capacity crowd why he is often referred to as the best climber in the world. Concentrated and absolutely psyched the Czech literally flew upwards, stopping only for a brief moment where Škofic had fallen to gather his thoughts before making an impossible-looking shoulder move and sticking the nonexistent top hold to take home his 15th Lead World Cup victory. Ondra’s joy was irrepressible and this gold joins an impressive, seemingly unstoppable run of victories that include, in just one season, gold at the World Championships, the European Championship and the Lead World Cup 2019. Even if the world seems to have changed beyond recognition in the last few months one thing has remained constant: wonder Ondra.


An emotional finale
The closing act of the competition saw IFSC President Marco Scolaris, FFME President Pierre You, Climbers Against Cancer Ambassador Sheila McCarron, French athlete Nao Monchois, and the family of Luce Douady pay homage to the young climber that tragically died on June 14. Luce’s family donated a 7.500 euros cheque to CAC, each of the speakers remembered her with a speech, and the tribute concluded with Luce’s own words, read by her father:

"I picture myself clipping the anchor, and there’s a great release, I feel a joy that I can’t conceal; a joy that’s so pure, so true, so strong inside of me, that it has to spill out… I spread it everywhere: to each face, each person I meet, I pass on my love of life and my cheerfulness."