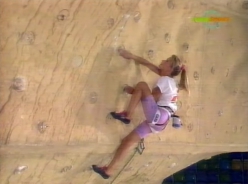 Isabelle Pattisier competing in the first ever European Lead Championship in Frankfurt, Germany in 1992
Photo by Eurosport 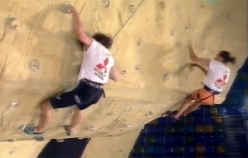 Kairat Rakhmetov racing against Cristian Brenna in the first ever European Speed Championship in Frankfurt, Germany in 1992
Photo by Eurosport

Three videos from the first European Lead and Speed ​​Climbing Championships, held in Frankfurt, Germany, in 1992.

This August sport climbing will make its debut at the Tokyo 2020 Olympic Games. This extremely important goal is obviously the result of years of hard work and, bearing this in mind, here are three videos dating back to 1992 when the first European Climbing Championships took place in Frankfurt, Germany. These came about after the first international sport climbing competitions took place in Bardonecchia and Arco in 1985 and 1986, the Arco Rock Master which started in 1987 and the first years of the World Cup started in 1989.

The videos is in German but the footage speaks for itself: world-class climbing with some legends of this sport such as François Legrand, Cristian Brenna and Luca Zardini, Isabelle Pattisier, Susi Good and Laurence Guyon, tiny crimps, composed spectators and a completely different pace compared to nowadays.

The differences in the Speed competition are even more striking; back then the athletes competed on two different routes and climbed each line to produce a total time. The current 15-meter parallel "track" was introduced in 2007 at the World Championships in Aviles. And back in 1992 Boulder didn’t exist as separate World Cup discipline; the first took place in 1999 and was won by an amazing Christian Core and an equally astounding Stéphanie Bodet. But with regards to the first European Speed Championship almost 30 years ago: the final race was between Cristian Brenna and Kairat Rakhmetov and went right down to the wire...