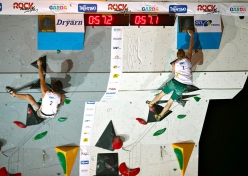 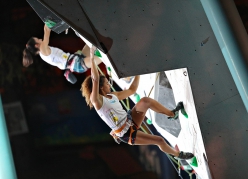 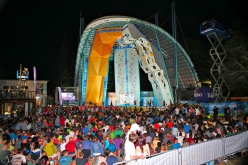 The 34th Rock Master competition will take place in Arco, Italy, on Friday 27 August 2021, and not as previously planned on 28 August. The event will be broadcast live on the Italian Rai Sport TV channel.

This summer sport climbing fans have had to… sit back and relax. No audience was allowed at the very first Olympic event in history and only a small one is permitted at the upcoming Rock Master in Arco (TN – Italy). The Italian TV channels did not broadcast much about climbing at the Olympic Games, also because, sadly, the three Italian climbers failed to make it through qualifications.

The Rock Master has been broadcast live on TV for many years now and the event in Arco has now rescheduled its date to Friday 27th August. On the orginal date, Saturday 28th August, the final phases of the European Volleyball also take place. Hence, for those who cannot make it to the Climbing Stadium in Arco for the breathtaking Rock Master Show, the organizing committee has now decided to anticipate the competiton to Friday 27th August, with a live TV streaming on Rai Sport, from 9 p.m. to 11 p.m.

Due to Covid restrictions the 34th edition of this event  will host a maximum of 300 people in the stands. A very small number, considering the thousands of climbing fans who every year have come to watch the majestic Rock Master show. This year the comeptiton format is as a special combined version of KO Boulder and the legendary Duel Lead. Access tickets on presale on Saturday, in accordance with the pandemic restrictions.

This year, the Duel will be even more difficult and spectacular. The sixteen champions signed up for the event are now official: eight men and eight women, with Adam Ondra in the front line ready to defend his title as the king of Rock Master, with a total of five victories, four of which consecutive from 2015 to 2018, interrupted in 2019 by the Austria's Jakob Schubert.

TICKETS
There are just 330 tickets for the 2021 edition. Presale has already begun and ticketing is open until Friday 20th August, subject to availability. There are three kinds of tickets: 200 seats for the ‘Full Day’ at a cost of 30€, 70 seats for the “Evening Only Duel” at a cost of 20€ and 15 seats ‘Family Place’ at a cost of 70€, exclusively for two adults and two under 14. Covid restrictions and rules apply to those entering the Climbing Stadium: only Green Pass holders will be allowes to enter. Those coming from non-Schengen Area countries must present a valid vaccine certificate or, as an alternative, a negative Covid swab rapid test or a negative PCR, done not earlier than 48 hours. For tickets: www.rockmasterfestival.com/2021/en/ticket/