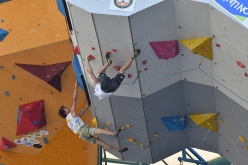 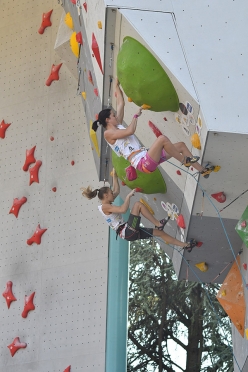 The Rock Master Duel, the challenge up the huge righthand Climbing Stadium wall, is an absolute must-see event at Arco and certainly one of the most exciting. It comes as no surprise therefore that the 30th edition of the champions climbing competition will be decided by the Duel. The concept is simple. 9 female athletes and 10 athletes compete. The first act is an individual race and the two female athletes with the slowest time are eliminated, just like the slowest male athlete. Which means that the best 8 duel in the quarterfinals. At this point they compete one against the other, a direct elimination on two identical and parallel routes, extremely difficult yet at the same time to be climbed at breakneck speed. A real, breathtaking race in order to reach the top first!

The first quarterfinal dual is between the two Slovenians Mina Markovic and Janja Garnbret. In the end Garnbret takes the win after leading right from the outset, beating the three times Lead World Cup winner Markovic. Japan’s Yuka Kobayashi duels against yesterday’s Lead World Cup winner, Anak Verhoeven from Belgium. The challenge is well matched, in the end though the Belgian wins thanks to a final sprint. In the Austrian duel between Katharina Posch and Christine Schranz it’s Posch who takes an significant lead and wins. The final race for the the Semifinals, France’s Mathilde Becerra vs Austria’s Magdalena Rock, is won by the Frenchwoman. Which means that those who qualify for the Semis are Garnbret, Verhoeven, Posch and Becerra.

In the men’s quarterfinals it’s Czech champion Adam Ondra against Germany’s Sebastian Halenke. Ondra, like a rocket, lifts off at breakneck speed, Halenke tries to keep up and… falls, is no longer in the game. Austria’s Max Rudigier gets the better of Slovenia’s Urban Primozic, wile his teammate Domen Skofic beats Italy’s Francesco Vettorata by a 5 second margin. The last to qualify is Austria’s Jakob Schubert who eliminates the other Italian Stefano Ghisolfi.

It’s time for the Semifinals and the races get even faster. Janja Garnbret and Anak Verhoeven set a deadly pace, climbing synchronised towards the top but then Garnbret steers clear and, with a 3 second margin, beats the Belgian. The second duel for the final is won by Katharina Posch, who beats Mathilde Becerra in a sprint that went down to the wire. In the men’s semis, Adam Ondra sets a new record to qualify for the final while Max Rudigier, despite finishing 8 seconds slower, still clocked in the second-fastest time so far. His great race is replicated by superb Schubert who comfortably beat Domen Skofic. The finals are going to be great…

In the small final, Anak Verhoeven wins the the battle for 3rd place with great determination, stopping the clock after 1’19” to beat Mathilde Becerra who finished fourth after 1’24”. But all eyes are set on the final Duel, between Janja Garnbret and Katharina Posch. The Slovenian climbers with great determination, yet the Austrian remains hot on her heels. One hold after the next, to the large rood, where Garnbret accelerates while Posch does her best to reach her. No go. Posch wins silver. While, in her first senior competition in Arco, 17-year-old Slovenian Janja Garnbret wins the Rock Master!

In the men’s event the battle for bronze is won by Austria’s Max Rudigier who, after a fought-out race, only just gets the better of Domen Skofic who, as it happens, fails to stop the clock in this final, desperate rush to buzzer. All that’s missing now it the last Duel, perhaps the one all have been waiting for, between the two athletes who until now have proven to be the strongest. The start is lightening fast, Adam Ondra wants to win at all costs. Jakob Schubert for his part doesn’t want to let him pass. The two climb synchronized, with Ondra in a tiny, almost impalpable lead. The Austrian keeps hot on his heels, right to the large overhanging wave. The slightest mistake would prove costly, but Ondra accelerates even more and sprints, unstoppable, to the top. The 30th Rock master Trophy belongs to Ondra, it’s the third time on the top podium here at Arco; always with the Duel formula, of which he is undoubtedly the king.