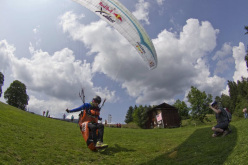 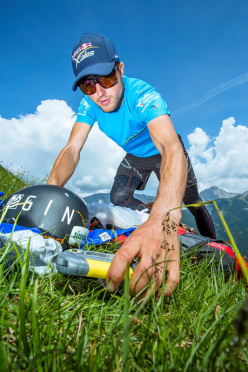 Aaron Durogati, the only Italian athlete who will take part in Red Bull X-Alps 2015
Photo by Red Bull Content Pool

Watch Aaron Durogati, the paragliding world champion, in training for the world's most spectacular adventure race: Red Bull X-Alps 2015. Over 1000km on foot or by paraglider, taking off on 5 July at Salzburg in Austriand landing in the Principality of Monaco.

Red Bull X-Alps is the greatest adventure a paraglider pilot can experience.” These are the words of Aaron Durogati, 29, the only Italian selected to take part in the 7th edition of Red Bull X-Alps, the most spectacular adventure race in the world.

As of 5 July, the day the race begins, the South Tyrolean athlete and the other 31 champions from 18 different countries will attempt to cover the 1,038 kilometers on foot or by paraglider all the way from Salzburg to the Principality of Monaco as quickly as possible.

After his superb debut in 2013 when he placed an excellent 7th, in 2015 Durogati intends to win the Red Bull X-Alps. To do so, the young talent has also recovered in record time from a serious injury he sustained in October 2014 while training for the competition.

As to his inclusion in the most challenging alpine competition in the world, Aaron says: "During the next X-Alps I expect to experience a great adventure and fight to conquer every meter of land and every kilometer in flight. This is why I train constantly, this is my dream. “