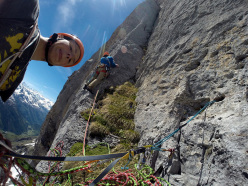 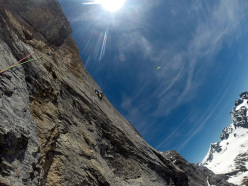 On 6 and 7 June 2014 Silvan Schüpbach and Luca Schiera made the first ascent of El Gordo (6c/7a, 450m) on Wendenstöcke, Switzerland

At the start of June Switzerland's Silvan Schüpbach and Italy's Luca Schiera made the first ascent of El Gordo, a 13 pitch line to the left of the Reissend Nollen peak in the massive limestone kingdom Wendenstöcke.

The two climbers established El Gordo ground-up and onsight, breaching difficulties somewhere in the region of 6c/7a and using only trad gear and pegs to protect the circa 450m line. "A long term dream of mine has come true" Schüpbach told Planetmountain, explaining "I'd seen the line a while back. While half the route follows a predominantly "classic" terrain, the other half offers first-class Wenden climbing with several demanding sections past pockets and technical slabs. The interesting thing is that it reaches the top of a peak that has probably never been summited before. In fact, there are no other routes in the entire face..."

Schiera and Schüpbach climbed the first four pitches on the 6th of June and, after having fixed these and abseiled back to the base, climbed the rest of the route the next day. It is worth noting that while the ascent was made with trad gear and pegs only, bolts were subsequently placed during the descent to facilitate the abseil. Almost all belays are now equipped with at least one bolt.

El Gordo is Schüpbach's second route on the Wendenstöcke after La Röschtigraben (700m, 8a+, 7b obligatory).