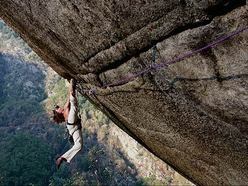 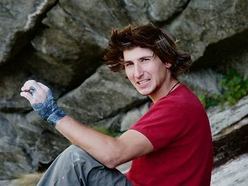 In the early 2000’s one of the leading figures in the sophisticated art of crack climbing was Didier Berthod, the Swissman who left his mark with many hard routes throughout Europe, notably the first ascent of Greenspit in Italy’s Valle dell’Orco. First ascended pinkpoint with preplaced gear in 2003 and then without preplaced gear in 2005, this roof was hailed as one of, if not the, hardest pure crack climb at the time.

Berthod’s exceptional attempts at freeing Cobra Crack at Squamish in Canada (freed by Sonnie Trotter in 2006) were documented in the cult climbing film First Ascent (featured in the second video below). At the height of his powers and aged only 25, following a knee injury in 2006 Berthod quit climbing altogether and retreated to a monastery in Switzerland.

For the next 13 years he dedicated his life to monkshood, but in recent times he decided to work as a priest and also return to climbing. Crack expert Tom Randall has now made this interesting, in-depth interview on his Wideboyz channel with Berthod who, unsurprisingly, has various projects in store.

28.11.2016
The routes climbing photographers dream of
Separate Reality climbed free solo by Wolfgang Güllich and Heinz Zak, Greenspit in Valle dell’Orco by Didier Berthod and Fred Moix. Maurizio Oviglia takes a closer look at the link between photographers and the climbs they have photographed.
29.06.2006
Sonnie Trotter frees Cobra Crack 5.14 b/c
Canadian Sonnie Trotter has made the first ascent of what he believes to be the hardest pure crack climb in the world, Cobra Crack 5.14 b/c (8c/8c+) at the Cirque of the Uncrackables, Squamish, Canada.