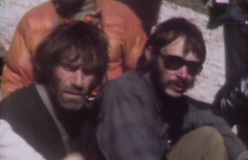 Warren Harding and Dean Caldwell on the summit of El Capitan, Yosemite, after making the first ascent of Dawn Wall, aka The Wall of Early Morning Light in 1970.
Photo by CBS

Archive footage of Warren Harding and Dean Caldwell topping out on El Capitan, Yosemite, after the first ascent in 1970 of Dawn Wall, aka The Wall of Early Morning Light.

In the wake of the recent success on Dawn Wall at the hands of Tommy Caldwell and Kevin Jorgeson, America’s CBS network has dug deep into its archives and unearthed some footage of the first ascent of the Dawn Wall, originally called The Wall of Early Morning Light by 47-year-old Warren Harding and 27-year-old Dean Caldwell who established the climb in late October and early November 1970. Planning on just 12 days to ascend the route, the two actually spent 27 days forging the line, drilling 330 bolts and despite being low on rations, waiting out a four-day storm and famously refusing a rescue from the Park Service. In a note dropped in a tin can during the ascent, Harding wrote: "We must be the most miserable, wet, cold stinking wretches imaginable. But we’re alive, really alive, like people seldom are."