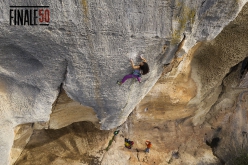 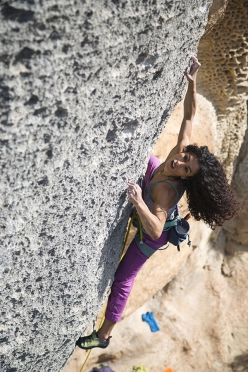 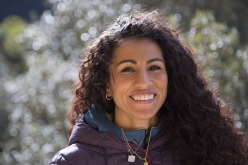 Egyptian rock climber Wafaa Amer report about her repeat of Hyaena, the milestone in Italian sports climbing freed by Andrea Gallo in 1986 at Finale Ligure.

As 22-year-old Wafaa Amer rightly says, Hyaena needs no introduction. But nevertheless, for the benefit of those unfamiliar with this climb, here’s a brief recap. The route is located at the Alveare sector at Monte Sordo above Finale in Italy, as was freed in December 1986 by Andrea Gallo who, 22-years-old at the time, has few other reference points to compare his climb to, seeing that sport climbing was in its embryonic phase. His 8a+/8b suggestion was upgraded a year later by Austria’s Gerhard Hörhager, but what counts isn’t its 8b/8b+ grade, but what this line with its famous cross through represents: it is one of the absolute symbols of the the upper extreme of the late1980’s, a dream come true for only a select few. Even today repeats are few and far between, and the first female ascent was only carried out at the start of the year by Giorgia Tesio. Now, after having almost sent the line a few months ago, Wafaa Amer has also repeated this historic testpiece. Amer was born in Egypt but she has been living in Italy ever since she was 9 years old; her words are indicative of the importance of this climb.

Hyaena
Hyæna is one of those climbs that, due to its history and beauty, certainly needs no introduction When I first went to Alveare a year ago my eyes immediately fell on this grey, compact rock in the middle of the "Beehive", an eroded mass of rock where one cannot climb, but whose colours enhances the extraordinary beauty of this line.

Right away I thought: "This is my route, no, this is THE ROUTE!" So I started to try it. I fell off the second boulder crux high up on the route just when the season came to an end, so I decided to wait for cooler temperatures.

Andrea told me he had chose the name inspired partly by the 1984 album produced by Siouxsie and the Banshees, and partly due to their strict diet he and his friend looked like two hyenas. For me, the name has always conjured up images of me needing to show grit and determination, being "a hyena" as they say in Italian!

On Monday 10 December, belayed by Alessandro Zeni, I managed to clip the anchor and realise my dream, first go of the day. I remember that in the my ascent was accompanied by some African music, Egypt 80 Fela Kuti, in the background. I could literally hear the music running through my veins!

I have to say that the day hadn’t started in the best way possible, and that as a result I didn’t even want to go to try the route! Nevertheless all that negative energy quickly transformed into positive vibes, and consequently I managed to add my name to this chapter of Finale’s climbing history.

The emotions were so intense that I started crying as I climbed the final slab. I’m extremely happy to have surpassed myself once again and hope that in the future there will be many other results like this one, as they make my climbing a real raison d’être!

A special thanks to my second family, Raffa and the il bandito for their moral support, to my friend Renato Delfino for all his patience and excellent teachings, to Lorenzo Fornaro without whom this would not have been possible, and to my friend Ale Zeni for his support, good company and belay.

Finally, an immense thank you to my sponsors E9 and Wild Climb