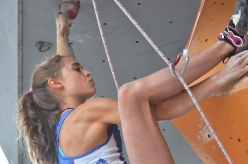 The first video of America’s Margo Hayes climbing La Rambla a Siurana in Spain, thanks to which she became the first woman to climb 9a+.

At the end of February 19-year-old American climber Margo Hayes shifted the borders of the impossible and became the first woman to climb 9a+. Here’s a first glimpse of her on La Rambla at Siurana. What transpires is her grit, incredulity and pure joy.