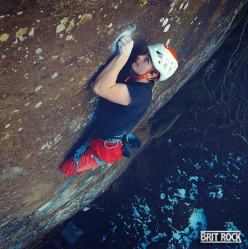 15-year-old climber Tom Pearce has repeated Divine Moments of Truth, a both difficult and dangerous trad climb located at Key Nest in England.

Child prodigies who climb harder and harder are an everyday occurrence nowadays, but almost exclusively confined to the realms of sport climbing where Théo Blass heads the table, having climbed 8c last year when he was a mere 10 years old.

Rarely does one hear about the limits of trad climbing being explored by youngsters, thankfully so we might add, and perhaps that is why the recent feat of 15-year-old climber Tom Pearce is so unique. The Brit managed to repeat Divine Moments of Truth at Key Nest in England which, graded E9 6c, is close to the top-end of the British trad climbing scale. Not content, instead of traversing left via the original exit he added a direct, even more exposed finish.

First ascended by Franco Cookson in 2015, the climb sports a delicate crux section protected by two dubious skyhooks, circa 15 meters off the deck, with cams a long way down below. This is likely to be the hardest trad route ever climbed by a youngster aged just 15.

The ascent was documented by Posing Productions and will feature in the new Brit Rock film tour.