James Pearson making a rare repeat of The Quarryman above Llanberis, North Wales in April 2016
Photo by Neil Hart 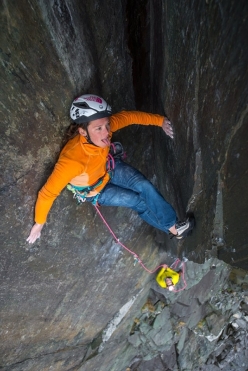 Caroline Ciavaldini inching her way up the glass-like corner of The Quarryman above Llanberis, North Wales in April 2016.
Photo by Richard Felderer / La Sportiva

The film The Quarrymen by Neil Hart, about the slate quarries above Llanberis in North Wales starring James Pearson, Johnny Dawes and one of Britain’s most famous multi-pitch rock climb, The Quarryman.

If you enter the slate quarries above Llanberis in North Wales, you’re certain to enter into a completely different dimension, a parallel world. Ever since the mining came to an end in the late 1960's, time seems to have stood still here for practically everyone except for climbers who enjoy a unique playground that requires both extreme skill and, in many cases, a huge dose of courage. After some initial forays in the 1970’s, climbing development began in earnest in the 80’s, and even today some of the creations from back then are highly sought after physical and psychological testpieces.

One of the biggest prizes of all is The Quarryman, established by Johnny Dawes back in 1987. In this film by Neil Hart, James Pearson describes his relationship with this four-pitch E8 7a which he repeated in 2016, breaching the famous groove pitch unique groove which Dawes had told planetmountain.com puts the body "under a full physical assualt." It’s worth noting that Pearson’s parter Caroline Ciavaldini made the long-awaited first female ascent of The Quarryman in 2018.

Llanberis Slate
At its peak during the second half of the 19th century, the slate mining industry dominated the economy in North Wales, employing almost 17000 men at quarries dotted around the country including the immense sites at Blaenau Ffestiniog, Bethesda and Llanberis. Entire hillsides were transformed irreversibly as Welsh slate was exported worldwide, but with the advent of cheap roofing tiles the industry showed the first signs of decline at the turn of the century, and then collapsed after the Second World War.

The Dinorwic quarry above Llanberis was the second largest mine in North Wales and when it closed definitively in 1969 it left behind a wasteland of vast proportions. The entire area was abandoned for years and it wasn't until the early 1980's that climbers ventured into the complex system of mines to explore this vertical Eden, discovering fantastic crags such as Vivian Quarry, the Seamstress slab, Bus Stop Quarry and of course Rainbow Slab.

Links: Instagram Once Upon a Climb, onceuponaclimb.co.uk, La Sportiva

05.07.2011
The Quarryman and Strawberries - important repeats in Wales
Jorg Verhoeven has made the second on-sight of Strawberries E6 at Tremadog while Steve Mcclure has carried out the first one-day ascent of The Quarryman E8 in the Dinorwig slate quarries.

26.10.2010
Vivian Quarry, slate climbing in North Wales
Vivian Quarry is perhaps the most popular slate crag in Wales due to its proximity to Llanberis and the vast selection of routes of all shapes and sizes.

14.04.2010
Rainbow Slab, Llanberis slate climbing in North Wales
Rainbow Slab is arguably the jewel in the crown of Llanberis slate. The immense, smooth face is broken by a series of smaller ripples and of course by the rainbow itself, a pulsing vein which arches steeply in all its beauty from right to left.