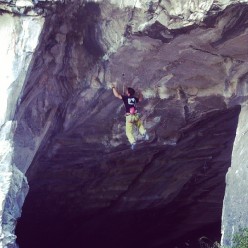 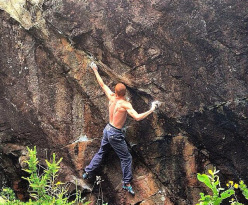 Stefano Ghisolfi climbs Underground 9a at Arco while at Champorcher Niccolò Ceria and Gabriele Moroni have made the first ascents of the boulder problems Gliese 581 8B+ and Minorenni a carico 8B.

Three of Italy's strongest young climbers, Stefano Ghisolfi, Niccolò Ceria and Gabriele Moroni, are currently on a roll. At Arco last weekend Ghisolfi repeated Underground, the route first climbed by Val gardena mountain guide Manfred Stuffer at Massone in 1998with a fairly peculiar history: initially graded 8c+, after repeats by Yuji Hirayama, Tomas Mrazek and Christian Bindhammer the route was upgraded and has settled in at 9a.

At Champorcher in Valle d'Aosta Gabriele Moroni freed a project he'd tried on and off for a while calle Minorenni a carico. "This boulder is very fingery and specific and it has one of the smallest crimps I've ever held" said Moroni to describe his new 8B problem. Not far from this boulder Niccolò Ceria made fairly short work of the direct exit to Zarmina, a probelm he freed in 2013. Ceria has suggested 8B+ and, in line with the astronomy theme, called the variation Gliese 581.