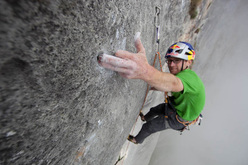 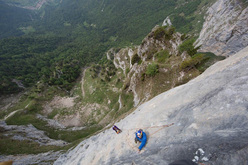 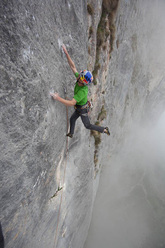 Solo per vecchi guerrieri by Iker and Eneko Pou

Iker Pou has carried out the fifth ascent of Solo per vecchi guerrieri, the beautiful and difficult route first ascended by Maurizio "Manolo" Zanolla on the N Face of "El Colaz" in the Vette Feltrine (Dolomites).

The Pou brothers in the Dolomites. On what route? Perhaps not everyone would have succeeded in guessing. Yes, because Iker and Eneko - definitely one of the world's strongest and inspired - headed to one of the most secluded and unknown areas in the Pale Mountains. We're talking about the Vette Feltrine. And the route in question is "Solo per vecchi guerrieri", for old warriors only whose name is a "manifesto" for rock climbing according to Manolo. Four (fantastic pitches) up 150m of superb rock, first ascended and freed by Manolo between the months of June and August 2006, now repeated by the Basque brothers over a four day period.

As to the actual ascent, only Iker managed to lead and redpoint the entire route. On the day of the successful ascent he fell on the 4th pitch, the hardest, during his first attempt off the final move: a small foothold broke as he was about to clip the chain. He then redpointed the pitch second go. His brother Eneko didn't repeat the final pitch. Iker's ascent is the fifth repeat after Mario Prinoth, Riccardo Scarian, Jenny Lavarda and Marco Ronchi.

Iker and Eneko described Manolo's route as being "fantastic" but also "one of the hardest vertical multi-pitches on the old continent", suggesting that the grades for single pitches are as follows: 7c, 7b+/7c, 8b, 8c. As many will remember, for the fourth pitch Manolo suggested "after much caution and confronting somewhere in the region of 8c and 9a" (read the interview). But we don't want to concentrate too much on the numbers. We don't feel this to be the important aspect. And, as you can gleam from their report, it isn't that important for the Pou brothers.

Unsurprisingly the Pous highlight not only the beauty of the route but also the style of the ascent, referring to psychologically demanding 3rd 8b pitch which translates into 20m Verdonesque climbing protected by just one bolt half-way up. They also added "it's one thing simply repeating a route like we did. It's something completely different though making a first ascent from the ground-up, imagining a line like this one, discovering the moves, with run-out gear... we really respect Manolo, quite simply a fantastic climber!"

So fantastic that the two wanted to meet him before climbing "Vecchi Guerrieri". To talk about climbing, the various visions of climbing, and simply to get to know each other. And this, perhaps, is the most beautiful thing of all.

We've completed this summer's first objective by climbing "Solo Per Vecchi Guerrieri" 8c / 150m.. The route which displays the hallmark signature of Maurizio Manolo Zanola: the route is not easily accessible, up great quality rock and extremely difficult (one of the hardest vertical multi-pitches on the old continent). You need to take your hat off to how this route was fist ascend from below (the first two pitches on his own, self-belayed), with run-outs up to 8-10m and difficulties in the region of 7c, 7b+/7c, 8b, 8c.

But all of this is not surprising really if one remembers that it was this visionary Italian climber, famous for his hard routes and his "free solos", who established the first grade 8 route in Europe, his "Il Mattino dei Maghi". On this 40m route there are 30m with just one bolt in the middle. We experienced four days of hard work, with typical Dolomite conditions: sudden changes in weather in the space of just a couple of minutes.

On day 3 we finally manage to try the entire route, but once again it started to rain and we had to go away empty-handed: for the third time! And in between one rain shower and the next we became totally numb with cold and wet waiting for the wall to dry out below the final pitch.

Day four was the final, decisive day: e managed to send the route despite the looming clouds! It was the only day we climbed without any problems... All four pitches are top quality but everyone has to treat the third 8b pitch very seriously indeed: a 20m smooth slab with pockets, Verdon-style.

Our ascent was made even more interesting by the fact that we met Manolo, by the depth of the thoughts we shared during the three hours spent with one of climbing's living legends, a man who climbed the first grade 8 route in Europe in 1981 and who, last year to celebrate his 51st birthday, climbed the 9a Eternit, his latest creation. I think that the name of Solo be vecchi guerrieri, for old warriors only, truly reflects who he feels today in the climbing world.

It was also nice to share our thoughts about the vertical world, which aren't all too different. If one thing is clear, it is that we all defend the "moral obligation" of climbing a route from below, like on Solo per Vecchi Guerrieri which was first ascended in this style. Only by respecting the philosophy of the first ascentionist - in this case a clear demonstration of courage - do we repeat "his route", and we can never improve on his ascent, seeing that the vision and genius will always belong to him, the first ascentionist.

We would like to thank all our friends in the Dolomites for their support and also those who repeated the route: congratulations for a job well done, because the route is fantastic!