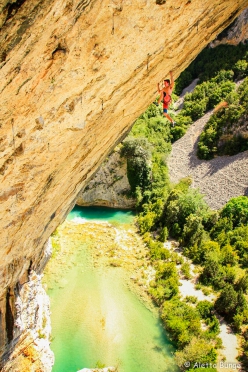 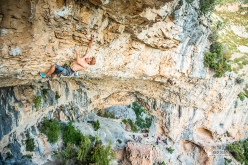 Seb Bouin at Rodellar making the second ascent of Patanics, put up by Jorge Diaz Rullo, for which the Frenchman suggests 9a+
Photo by Julia Cassou 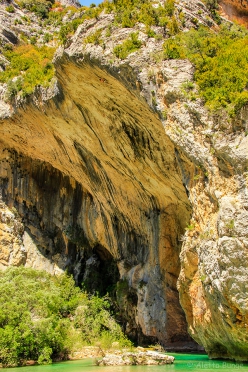 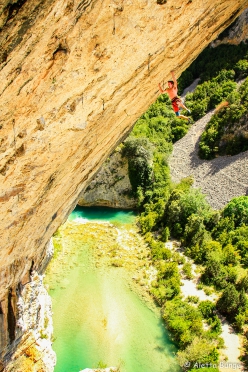 At Rodellar in Spain the French climber Seb Bouin has made the first repeat of Patanics, for which he suggests 9a+, and the first free ascent of Detectives 9a.

Sébastien Bouin has claimed the first repeat of Patanics, the mega outing at Rodellar freed this summer by Jorge Díaz-Rullo and originally graded 9b. On only his second day the Frenchman got close to the ancors, falling off the last hard move, but then it started to rain and the route seeped, forcing him to change some sequences. In addition, a small piece of metal ended up in eye and after having it removed at ER he kept it bandaged for two days prior to the redpoint.

The 26-year-old believes the grade is more in the region of 9a+ and not 9b a originally suggested, especially when compared to other routes he’s sent such as Mamichula at nearby Oliana, Move at Flatanger in Norway, and La rage d’Adam in the Verdon Gorge in France, although he does admit it perfectly suits his climbing style.

Bouin is evidently in great shape and a few days ago he made the first ascent of Detectives, an immense, spectacular climb at the Picineta sector bolted by Chris Sharma and Dani Andrada many years ago and now graded 9a. According to Bouin this is now the best route of its grade at Rodellar.

TOPO: Climbing at Rodellar in Spain

31.10.2002
Climbing at Rodellar, one of the most famous crags in Spain
Deep in Spain's Sierra de Guara lies one of Europe's most famous climbing areas: the crag Rodellar. This limestone eldorado, which takes its name from the tiny village nestled snug at the end of the road in the picturesque Mascun valley, is quite simply breathtaking.

12.09.2011
Sasha DiGiulian, 8c+ redpoint and 8b+ on-sight at Rodellar
American climber Sasha DiGiulian has sent her third 8c+ Cosi Fan Tutte at Rodellar in Spain and on-sighted Maskoking 8b+.