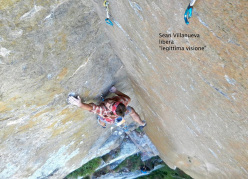 In Valle dell'Orco, Italy, Sean Villanueva has carried out the first free ascent of Legittima visione, while Nicolas Favresse has freed Schittingbull.

Invited to Turin to take part in the 150th anniversary celebration of the Italian Alpine Club, Sean Villanueva and Nicolas Favresse obviously made the most of the occasion to get some climbing done and, seeing its vicinity, the Valle dell'Orco granite was on the agenda. The two were guided by expert local Adriano Trombetta and despite the poor weather Villanueva and Favresse immediately got to work on some of the newest valley lines, but the highlight was certainly the first free ascent of the two-pitch Legittima visione at the Dado cliff. According to Trombetta this is a "crazy line, the most perfect corner in the entire Orco valley, and further afield, too." Trombetta had seen and bolted the route which seemed impossible until just the other day when, dangling from the ropes to take some photos, Trombetta spied an elusive crimp.

On the blogside site Trombetta recounts: "Villanueva climbed with amazing determination, hed already messed up two sections but it seemed like he was on for the redpoint... He saw the marked hold, stuck it... and shouted out "Ça passe!" It was really exciting for me, discovering that the dream was indeed possible (even if via someone else's fingers) and witnessing first hand (and really close up) one of the strongest "graniters" in the world interpret these extreme moves!

The beauty of the route was confirmed directly by Villanueva himself who told planetmountain "Legittima visione is a striking red dihedral, it's an amazing climb, extremely technical. All credit goes to Adriano for envisioning the line, cleaning and equipping it. He was really excited to get us on it to give it a try and his motivation was infectious. It's very precise dihedral, climbing on micro edges with tiny footholds and balancy moves. After I went up the first time and worked out the moves I didn't think I was going to do it, but somehow I executed the moves perfectly and reached the final jug without falling. I'm really happy to have climbed it. It's a true pearl of a route! I would strongly recommend it. Some thoughts on the grade? Well, it's difficult to say because it's such a old-school technical style, so I would say something like 8a-ish technical old school!"

Obviously Favresse got up to his usual tricks too, freeing another project to the left of the beautiful crack Sitting bull. The new line, Schittingbull, is a trad climb graded R4 7b/c and described by Trombetta as "another crazy line, protected on the crux by particular pegs and pecker..." and "one of the hardest and most engaging climbs in the entire Orco valley." Not bad at all, especially if you bear in mind that Favresse freed it in the drizzle!