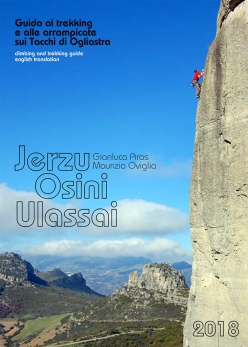 The video of the sector Jerzu 40 and Jerzu, the 'historic' sports climbing area in south-east Sardinia. By Maurizio Oviglia

Spring is fast approaching and in Sardinia the climbing season at Tacchi di Ogliastra is about to begin. The beautiful crags at Jerzu and Ulassai will soon be bustling and I thought I’d remind you that the historic Jerzu crag has a new sector. I introduced this last year on planetmountain and it’s already proven to be extremely popular. The climbing is varied and ranges from slabs to overhangs, with a good dose of beautiful cracks and corners.

The peculiarity of Jerzu 40 is that it has several 40-meter sport climbs, so take care when lowering off and always tie a knot in the end of your ropes. Since it’s north facing, it’s also ideal for climbing on hotter days. Last year Paolo Contini and I filmed some footage which I’ve only now managed to put together into this short video. It gives a reasonable idea of how beautiful the climbing is here.

Last but not least, I’d like to remind readers that last August with Gianluca Piras I published a guidebook to the ​​Jerzu / Ulassai and Osini areas. Translated into English and financed by the local shops and businesses, it costs a mere 10 euros and the proceeds will obviously be used to bolt new climbs in the area.

29.01.2013
The rebirth of Jerzu in Sardinia
Maurizio Oviglia discusses the latest developments at Jerzu, one of the most beautiful and popular climbing areas in Sardinia.
19.12.2005
Cristian Brenna autumn update
Cristian Brenna climbed in the Czech Republic andSardinia where he repeated "Sapientino" (8c) and "Anime Salve" (8b+) and on-sighted "XL" 8a/a+, "Raoni" 8a and "Totem" 8a at Cala Fuili, and "Manifesto" 8a at Jerzu.
17.09.2004
Francesca Chenal repeats 'After Eight'
Francesca Chenal has made the first repeat of 'After Eight' 8a at the Castello di Jerzu, Sardinia.