► News ► Climbing ► The rebirth of Jerzu in Sardinia
Versione italiana 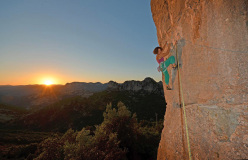 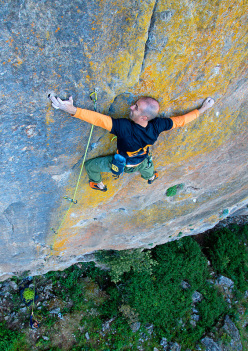 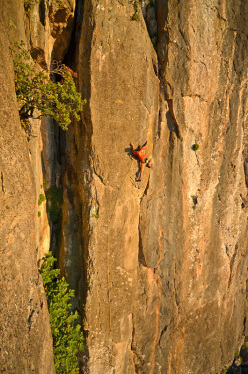 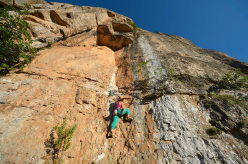 Not all routes are difficult. Here Cecilia Marchi climbs Mosca Bianca at the Castello.
Photo by Maurizio Oviglia

PORTFOLIO / gallery Portfolio: The rebirth of Jerzu in Sardinia

The rebirth of Jerzu in Sardinia

Maurizio Oviglia discusses the latest developments at Jerzu, one of the most beautiful and popular climbing areas in Sardinia.

Jerzu is one of the most famous climbing areas in Sardinia. Perhaps not everyone knows though that the first person to lay his hands on Castello di Jerzu was Marco Bernardi, back in 1980. Marco had a hammer and pegs with him and no one would have found out about his climb had it not been for "Mezzogiorno di Pietra", Alessandro Gogna's climbing "bible" which no climber's library should be without... However, it was only in 1989 that I began, together with some friends, to systematically bolt these rock faces and which received local council financial support for the first time in 1996. In this sense, the Ogliastra councillors have always been one step ahead, the first (and unfortunately sometimes only)) to comprehend how important it is to help us new routers. In addition, Jerzu and Ulassai administrators and hoteliers have always encouraged those who have created new routes here, those who invested their own resources in the past. Crags are like sports fields, I often say to the councillors, they're something you inherit and apart from the indisputable opportunities they generate, they offer excellent fun for the local youngsters.

Regardless of this, after the three major sectors at Jerzu were developed, the nearby village of Ulassai started to show its interest in climbing, too. Steeped in history and culture and a mere 5 km from Jerzu, the rock faces of this charming small village are truly exceptional. Thanks to the hotelier Tonino Lai (and the help of the local tourist office which often had to fight against all odds) the beautiful cliffs Lecorci and Canyon came into being, due above all to Vlady Selis, Simone Sarti (Canyon area), Gianluca Piras (Lecorci sector), Giampaolo Mocci (Cave of Dream sector) and myself.

To date, the Jerzu Ulassai area has roughly 400 - 500 sport climbs and is popular above all in summer, although climbing is possible throughout the year. In the past the routes were often criticised for being too technical and fingery, in other words for specialists! But the latest bout of new routes in the Ulassai area have holds which a more generous and despite being overhanging, have forced the unconvinced to change their minds!

After a period during which Jerzu was not particularly popular and climbers from the continent flocked to more trendy areas such as Isili or Cala Gonone, lately things have begun to change. Last summer the Ulassai Canyon resembled a Spanish crag, filled to the brim with climbers and (unfortunately) plenty of tickmarks on the holds! Matteo Cappa from Piemonte, with the help of ever-motivated evergreen Simone Sarti, added some splendid difficult new routes to the canyon roads while Maurizio Oviglia and Cecilia Marchi added some routes to the historic Castello di Jerzo. This received financial support from Gianni, hut warden at Rifugio d’Ogliastra, set enchantingly at the base of the rock face and open (hear hear!) all year round! It's worth remembering, too, that a few years ago Gianni had helped Fabrizio Dessì create the new sector Palazzo d’Inverno.

Those who have been to Jerzu and Ulassai know full well that the area's potential for new climbs is practically endless. While it's true that the local government interest is laudable and sacrosanct, this often means that new routers wait prior to picking up a drill... resulting in the efforts of "volunteers" being directed elsewhere. This is perhaps why development has slowed down and, in difficult economic times such as this one, it's not always possible to add new routes and sectors (perhaps not everyone knows just how much it really costs to bolt a new route nowadays). In the meantime though, Jerzu remains one of the most beautiful and popular areas in Sardinia. The most beautiful of all? I've never kept this a secret and always said I believe it is. Even if, a few years ago, not many agreed with me!

JERZU / ULASSAI SOME PRACTICAL INFORMATION
Logistics: Jerzu is located a few kilometers off Sardinia's east coast, not far from Tortoli in the Ogliastra Province. It 'takes about 1 hour and 15 minutes from Cagliari (along the new road SS125) and almost two hours from Cala Gonone. It is located about 45 minutes from Baunei.
Best time of year: The climbs are located at an altitude of circa 800m, immersed in characteristic landscape of forests and rock formations (Tacchi). The ideal time of year is spring and autumn, although it is undoubtedly Sardinia's "coolest" area in summer. most come to climb here in these seasons
Accommodation: Renting appartments at Jerzu is currently quite expensive, especially compared to what is on offer at Cala Gonone. Climbers should therefore take advantage of small hotels and B&B's. Apart from the historic Hotel Su Marmuri Ulassai ((www.hotelsumarmuri.com) managed by Tonino Lai, I alos recommended a stay at Rifugio d'Ogliastra (www.rifugiodogliastra.net) below the castle walls and where half-board for climbers is a great deal!
Guidebook: All crags and routes, except the latest (about ten) are listed in the latest version of Pietra di Luna (2011), published by Fabula Editori
Sights / Culture: At Jerzu there are a number of events which are essentially related to wine and the theater (Calici sotto le stelle - wine glasses beneath the stars) in June. At Ulassai do not miss out on a visit to the caves (www.grottesumarmuriulassai.com) and the beautiful Art station ((www.stazionedellarte.it). Highly characteristic are Maria Lai's designer carpets (www.sumarmuri.i) as well as numerous monuments nearby.
Hiking and mountain biking: There are numerous trekking and mountain biking routes. For information about walks refer to Hotel Su Marmuri, for mountain biking check out the recent guidebook published by Versante Sud.

Settore Vela: 4 ruotes up to 7b+ – Matteo Cappa
Lecorci: some routes and bolts reequipped by Gianluca Piras