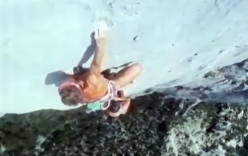 The classic 1984 climbing documentary by Sid Perou about Ron Fawcett, one of the outstanding rock climbers of the 1970s and early 1980s.

At the start of the 80’s Ron Fawcett was the most famous rock climber in Britain, among the best in the world whose drive, determination and legendary fitness pushed standards to difficulties hitherto unthought of.

Fawcett embraced both trad climbing and early sport climbing and his additions to British climbing are monumental - The Cad at Gogarth, Tequila Mockingbird at Chee Tor, Lord of the Flies on Dinas Cromlech, Strawberries at Tremadog and Master's Edge at Millstone Edge to name but five.

In this classic documentary by filmmaker Sid Perou, Fawcett is seen climbing above all in the Verdon Gorge in Southern France.