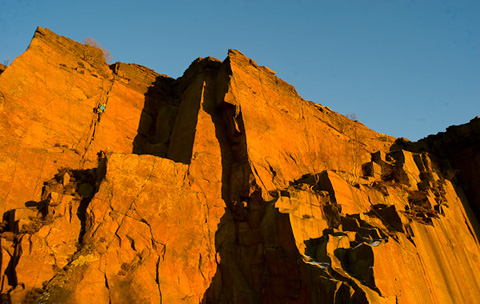 Along with Stanage, Froggatt and Burbage, Millstone is regarded as one of the most popular gritstone crags in the Peak District. As a result of the intense quarrying the outcrop is characterised by smooth, fritionless vertical faces, fierce cracks, imposing corners and a series of bold arêtes which includes two of the most sought-after routes in the country: Edge Lane and Master's Edge.

The unprotectable left-hand arête in the aptly named Corners Area was first ascended by Alan McHardy in 1974 and although a bold outing, its relatively easy crux (at the top) ensures that Edge Lane has become one of the most desired E5's in the country.

Master's Edge immediately to the right needs little introduction and this 1983 work-of-art stands as a timeless testament to Ron Fawcett's brilliance and determination. Young Jerry Moffat, who had had his eyes set on the route, stated at the time that only a true master would one day be able to solo it on-sight, hence the name. Its boldness and technical difficulties have repelled all but the most gifted and no one, as yet, has risen to this audacious challenge.

Just before these routes lies the Embankment Wall Area which hosts one of the finest selection of climbs of all, including John Allen's awesome London Wall E5 6a. First ascended in 1975, this quintessential crack climb is extremely pumpy but, unlike many of the other routes here, completely protectable. Other three star outings include the The Mall, Bond Street, Great Portland Street, Regent Street, Coventry Street... the list is a long one and a trip here will certainly ensure a far greater adrenalin rush than on the more famous streets of London!

From Sheffield or Manchester drive to Hathersage. The crag is clearly visible above Hathersage: take the A6187 (Sheffield Road) and park in the large pay & display car park above the crag. Take one of the paths across the moor to the crag. The areas are reached in 10 minutes. An alternative approach, especially if visiting the north end, is to park in limited parking on the road that leads down from Higgar Tor. Follow a scenic path through the birch trees to the crag.

Steep face and crack climbs, both technical and powerful, as well as balancy arêtes.

The Peak District
Squashed between the northern industrial cities Manchester and Sheffield, the Peak District has always been a haven of peace for those fleeing these massive industrial metropolis in search of solitude and untouched nature. Dotted within this rolling countryside are rugged gritstone outcrops, each unique, each with routes of almost all grades and danger levels. "God's own rock", as it is often described, can be so addictive that it is not uncommon to see climbers continuing even when it rains; saner wet weather alternatives include a visit to one of the numerous indoor climbing walls or an enormous mug of tea in a cafe.

Millstone access issues
Voluntary restrictions to access are agreed annually if ravens or peregrines nest here. Please look out for signs during the nesting season. Any restrictions are regularly reviewed and lifted once the birds have fledged, at which time the signs will be removed. For full information check out www.thebmc.co.uk 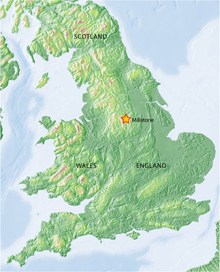 Spring and autumn. On clear winter days the friction is at its best, but beware of strong winds as the crag is positioned near the top of the hill above Hathersage and therefore receives the brunt of any bad weather.