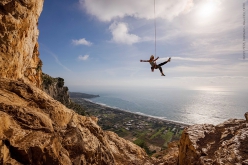 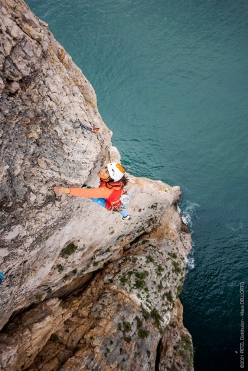 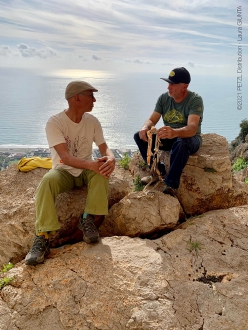 After the magnificent limestone crags at Finale Ligure, the second stage of the Petzl Legend Tour Italy stops off at Sperlonga, the hotspot for sport climbing development in Central Italy during the 1980’s.

"We just climbed the beautiful Flippaut slab with one rest, I looked up towards the horizon and looked for the Pontine islands. I saw them lying lightly on the line that separates the blue sky from the rest of the world, and I thought that the history of that place was still to be written." (Andrea Di Bari, Il fuoco dell'anima)

The second stage of the Petzl Legend Tour Italy was inspired by a book, by the emotions unleashed by those words. After reading Andrea di Bari’s Il fuoco dell'anima we visited Sperlonga, the birthplace of sport climbing in central Italy. We followed the guiding thread of Patrick Berhault's visionary impulse, we re-tied the threads of a story that, from Finale and the Ligurian Sea, reached these rock faces overlooking the Tyrrhenian Sea. Stefano Finocchi, Andrea Di Bari, Bruno Vitale, Alessandro "Jolly" Lamberti… with the help of these main players and their stories we reconstructed how the first bolts shone on Monte Vannellamare, resulting in reference routes such as Flippaut, Kajagoogoo and Polvere di Stelle while, high up on Monte Moneta, the Roman kings of the overhangs duelled each other.

Chasing the grades
These are stories of friendship and rivalry, stories of a great love, for mountaineering, which then transformed for many into a frantic search for a new apex: the grade. The story of how sport climbing set its roots in Sperlonga’s limestone cannot ignore the atmosphere that reigned in the ’80's in Rome, and the travels of its main players along the Appian Way. Journeys marked by a soundtrack that became an integral part of Rome’s vertical history.

Rediscovering an abandoned sector: Il Tempio
This second episode was not only a journey of discovery, but also rediscovery, namely that of a sector which had been abandoned for decades, Il Tempio. Severino “Seve” Scassa, another living legend of Italian sport climbing history, joined the Petzl team and left his mark by re-equipping four old climbs with stainless steel bolts. Thirty years down the line Federica Mingolla now became the first to touch the rock at Il Tempio and repeat the historical 8a Sacrilegio.

See you at Guido's
For us the true symbol of this journey is Parete del Chiromante, the crag dedicated to Guido who runs the restaurant which, for the last three decades, has been place where all Roman climbers meet.


At sunset we always ended up in a large restaurant located below theses walls. The sign said Ristoro da Guido, Il Chiromante. We became friends. Guido claimed to be able to predict the sex of an unborn child merely by observing the hands and eyes of the future mother. Of course we didn’t believe him, instead we thought of the crags, the routes, the things happening then and now: the pegs and ropes fluttering in the sirocco wind, the sunset over the sea, the waves that incessantly sang for us. It was time to call things by their name and the great wall became La Parete del Chiromante ". (Andrea Di Bari, Il fuoco dell'ima)

The future of Sperlonga is in the hands of those who love it
For many years Sperlonga was almost forgotten about, yet there are some who have never abandoned it. Bruno Vitale, together with his climbing partners, continues to be the local custodian. And nowadays there is also a group of young and passionate climbers, perhaps a little romantic, most certainly in love with the magic that this place continues to exercise. Thanks to all of them the history of Sperlonga continue to flourish.

The project was developed with the help of La Sportiva®, Jeep®, Vibram® and Case Vacanza Sperlonga. Petzl thanks them for the their support and help.

The film was shot in February 2021 in compliance with Italian government regulations.

12.04.2013
Sperlonga, rock climbing, memories and beauty by Ivo Ferrari
Ivo Ferrari and the simple beauty of climbing: 3 rock climbs at Sperlonga and the pleasure of climbing, of feeling the sun and the rocks, and delving in the past (Fabio Delisi) and present.