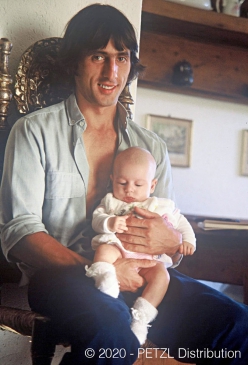 Patrick Berhault with his daughter Coralie
Photo by Alessandro Grillo 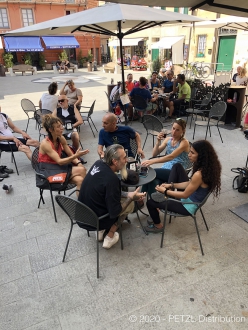 Watch the first episode of Petzl Legend Tour Italia, a journey to Finale Ligure exploring the origins of Italian sport climbing in the 1980's

The Petzl Legend Tour Italia is a journey, told via a series of short documentary films, to discover the symbolic birth places of Italian sport climbing in the 1980s. The first episode is all about Finale Ligure, a land of exploration, sea and rock


Chapter 1 Petzl Legend Tour Italy
Patrick Berhault looks straight into the camera lens, holding his little Coralie gently in his arms; he almost seems to be smiling at us as we climb the rock faces above Finale Ligure where he contributed in writing important chapters of sport climbing history. His climbs are our "guiding thread". It was Alessandro Grillo, in many respects an older brother to Patrick and, without a shadow of doubt, a pioneer of early sport climbing at Finale, who showed us this photograph. And so it is that the first chapter of our journey begins in Finale Ligure, armed with climbing shoes, in the footsteps of those pioneers, forefathers, better still, legends of a sport that, from the 1980s to today, has transformed and evolved so far as to earn itself a place at the Olympics.

The Journey to Finale Ligure

Capo Noli, Rocca di Perti, Monte Cucco, Monte Sordo, Rocca di Corno, Bric Pianarella. We’re not here to search for hard grades, but to delve into some climbing history. For a brief moment we feel like we’re taking a step back in time and have these almost virgin lines all to ourselves. There are so many different  interpretations and dreams that contributed to making Finale what it is today, and we’d like to pay homage to all of them, one by one, because they were true visionaries, they challenged the limits through their imagination and courage. We start our journey from the sea, because it is as if the newly invented sport climbing stemmed from there, from the coasts of southern France. Capo Noli is our first stop. We climb the 7a Dancing Dalle, we want to find out when and how it was bolted, so who could give us the lowdown better than Alessandro Grillo? Our bible is, it goes without saying, Andrea Gallo's guidebook. We leaf through it and read about the 7b Nuovi Guerrieri, New Warriors, and immediately make our way to Rocca di Perti. The climb’s elegance and our encounter with Giovanni "Giova" Massari are dazzling. With Grillo we then set foot below Monte Cucco to rediscover another piece of history that links Patrick Berhault to Finale. Climbing through the roof of his Coralie 7a+ is an moment we will not forget. Having said that, one cannot claimed to have climbed at Monte Cucco without dancing up the line of Occhi dolci per Frank Zappa, a 7b bolted by Martino Lang. Lang and Luca "Blond" Biondi then take us to Monte Sordo, to the sector Alveare, to climb one of the most visionary routes of the ’80's, the 7c+ Viaggio nel futuro, Journey into the future. The name they chose couldn’t have been more fitting, because the future of sport climbing would soon become dominated by large roofs and huge. Grillo then leads us back to retrace the footsteps of those pioneers, as we get lost in the sea of ​​rock at Bric Pianarella and marvel at the sunsets at Rocca di Corno where Finale’s first sport climbs were established. Our journey is by no means complete, because it is simply impossible to condense years of climbing history in the space of a few minutes, but it aims to arouse curiosity and make climbers excited and aware of their past. Personally speaking it reminded us that the thrill of discovery and exploration can and must start with those who went before us.

15.02.2016
Stefano Ghisolfi frees Dingo at Finale, Italy
At the crag Monte Sordo in Finale Ligure, Italy, Stefano Ghisolfi has made the first ascent of Dingo. The Turin-based climber suggests 8c+ for this project bolted by Andrea Gallo in 1992.