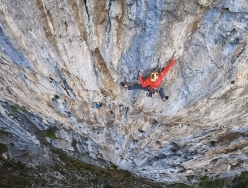 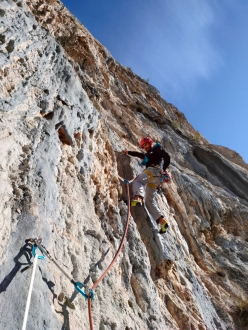 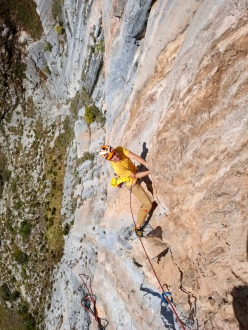 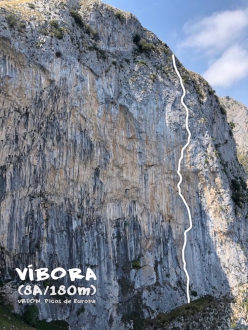 Eneko and Iker Pou, climbing with Kico Cerdá, have made the first ascent of Vibora (180m, 8a) up the overhanging Urdón face close to Barranco de la Hermida in the Picos de Europa massif in Spain.

After the toils encountered while establishing Rayu, the 600m multipitch that breaches the south face of Peña Santa de Castilla in the Picos de Europa massif past difficulties up to 8c, the Basque brothers Iker and Eneko Poi teamed up with Kico Cerdá once again and spent three somewhat less demanding afternoons forging a new line up the overhanging Urdón face close to Barranco de la Hermida in the Cantabrian part of the same mountain chain.

The result is Vibora, established ground-up as usual then freed with difficulties up to 8a. Protected with a mix of cams and bolts, it provides some runout climbing where a fall is best avoided. This alpine outing is a route "… with character. Those who are looking for a sport climb should abstain, because it’s not a sport route!. But it’s great for those who like to push hard in an adventurous environment and on a beautiful wall."