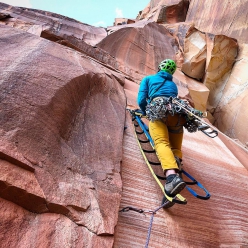 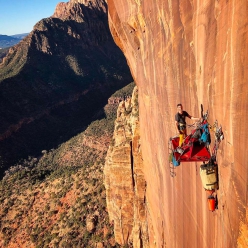 Climbing in Zion National Park, USA: in November 2018 Paul Gagner and Ryan Kempf made the first ascent of Museum Piece (V 5.8 A4), a new aid climb up the Angelino Wall.

Although not quite as famous as Yosemite, for many Zion National Park still represents the epitome of big wall adventures. In late November expert American climber Paul Gagner teamed up with Ryan Kempf to complete a line he had started 14 years ago on the Angelino Wall with William Crouse. Bill and Paul started on the first 2 1/2 pitches of Drop Zone (Dougald MacDonald, Chris McNamara) before heading out to the right. At the time the duo climbed six pitches but then bailed, and throughout all these years Gagner always wondered whether the roof could be breached without drilling a ladder of rivets through it.

Gagner and Kempf quickly reached the previous highpoint and Kempf then led what he has described as what "might be my most memorable aid lead to date", involving a string of Peckers and Cassin Iron Hawks and, importantly, no drilling through the steep bulge. After spending four days on the wall, the two topped out of what has now been called Museum Piece. Rated V 5.8 A4, the new aid route promises adventurous climbing well off the beaten path. The pair rapped the route to descend.

Museum Piece is Gagner’s third route at Zion. In 1994 he established Latitudes (VI A4+) up the Streaked Wall with the late Eric Brand, while in 1994 he and Rick Lovelace climbed Sand of Time (V 5.8 A3+) up Isaac.

When we first talked about the climb Ryan @shiverbivy asked me if I thought the route was worth the effort to finish. While I wasn’t positive I told him I thought it probably was. First ascents are always tough as you obviously don’t know what the route above you really is going to be like. I think we both agree now that it was worth the time and expense. Ryan leading the pitch 6 splitter. #zionnationalpark #climbing #bigwall @metoliusclimbing @fiveten_official @adidasterrex