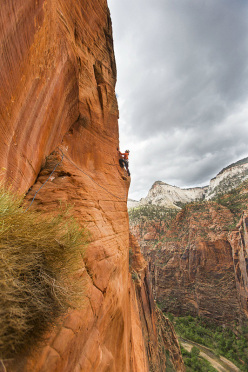 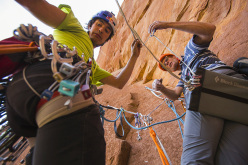 Conrad Anker and David Lama have completed the first ascent of Latent Core (450m, 5.11 A1) in Zion National Park, USA.

America’s Conrad Anker and Austria’s David Lama teamed up in mid-May to complete a route Anker had first attempted almost 25 years ago at the stunning Temple of Sinawava in the Zion National Park. At the time Anker climbed five pitches together with Doug Heinrich but was forced to retreat.

During the abseils a rope got stuck and they were forced to abandon it. Anker always intended to return to remove it but as so often happens, life got in the way. "Back then" says the 52-year-old "I was sure that I would come back. But days turned into weeks, weeks into months, months into years and years into decades."

The opportunity finally came this year: Anker and Lama may well try something together in the Himalaya, and they felt they needed to spend some time tied in to the same rope. Zion was on the agenda, but instead of repeating the classic Moonlight Buttress, Lama was more tempted by the impressive, steep wall at the entrance to the Narrows. As the name implies, this is the narrowest section of Zion Canyon through which the Virgin River runs.

The duo spent four days completing the 10-pitch, 450m high sandstone outing, climbing ground-up past difficulties up to 5.11 A1 and dodging rain on the last day. The rope, it goes without saying, has been removed and the route has been called Latent Core.