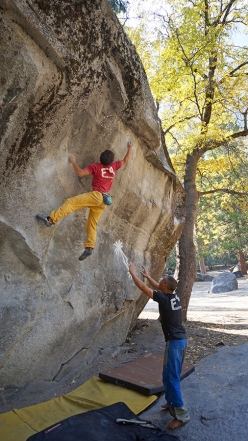 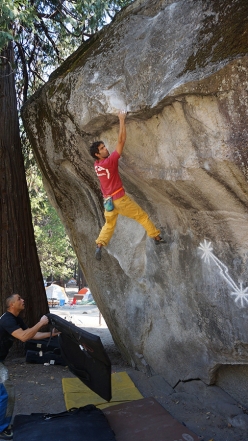 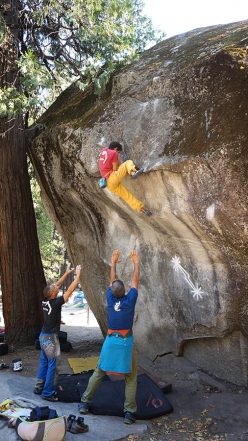 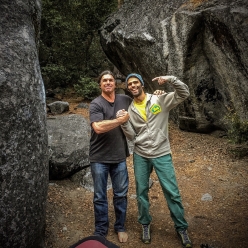 Ron Kauk and Filippo Manca, after having climbed Midnight Lightning in Yosemite
Photo by Rolando Larcher

Filippo Manca talks about his bouldering trip to America where, in Yosemite, he managed to repeat the legendary Midnight Lightning boulder problem. Moments later he encountered American climbing legend Ron Kauk who, in 1978, made the first ascent of what has transformed into one of the most famous boulder problems in the world.

Midnight Lightning needs no introduction. Located below El Capitan in Yosemite, it is a strong contender for being the most famous boulder problem in the world, first ascended after four months of effort in 1978 by US climbing legend Ron Kauk. At the time the tiny crimps at the start that lead to the delicate finishing mantle, climbed without the benefit of crash pads, represented theabsolute zenith of bouldering, and over the years this V8 (7B/7B+) lightning bolt has inspired generations and generations of climbers. So much so that many make the pilgrimage to Camp Four, the historic climbers campground, not to climb El Cap, Half Dome or other big walls, but specifically to try this famous sequence on the Columbia Boulder. Just like Sardinian climber Filippo Manca who shares with us what no doubt was a very special experience, seeing that after the send he had a chance encounter with the man who almost 40 years ago first climbed this important milestone in rock climbing.

I've always been curious to see places that have shaped the history of climbing, and much like other climbers I have their own wishlist of things that I want to do. One of my dreams was to climb the Columbia Boulder in Yosemite.

Camp 4 is a symbol for climbers, entire generations have met and tested and honed their skills here. The campground is fairly spartan and simple, contributing to its originality at the expense of some modern comforts; but then you find yourself talking around the campfire in the evening with people from all over the world, and you realise that you all share the same excitement and the same passion; you comprehend that here in Yosemite there’s an unbridled love for climbing and all its facets, from bouldering to big walling, well, I reckon that's the true spirit of this place…

In the mornings people leave their tents fairly early as they head off to their climbs; in the evenings the campsite fills up again, with some sorting out their gear for the next day while others search for firewood. All this happens as many gather below the most coveted V8 in the area; it transforms into a hangout, and as some play the guitar, others relax and sip a beer as they wait for the sun to set. And of course there are those who attempt to climb Midnight Lightning!

It's impressive how that chalk arrow at the base of the problem, drawn by John Bachar during his attempts and inspired by a Jimi Hendrix song, continues to influence so many climbers even today, almost 40 years after the first ascent carried out by Ron Kauk back in 1978.

I feel tired, I drove all night from Los Angeles, fortunately though we arrived early at the campground and managed to secure a campsite; something that can’t be taken for granted seeing how popular Yosemite is this season. After pitching out tent my climbing partner Simone Masini and I decide to relax a bit. In the afternoon I begin to realise that I'm exactly where I dreamt of being for months as I trained impatiently in my father's garage. I can’t resist temptation, Simone and I exchange a quick glance…and we head towards the problem to give it a go.

After a quick warm-up we make our way to Midnight Lighting, place our crash pads and then I hear someone calling my name. Maurizio Oviglia happens to be in Yosemite with two other good friends and climbers, Rolando Larcher and Roberto Vigiani. They’re having a rest day and had decided to stroll over here. After a quick chat I take advantage of two more spotters and, much to my own surprise, after a couple of attempts I find myself up on the famous mantle. But I get too excited and fall down a few seconds later…

Maurizio and the others spot me on a few other unsuccessful attempts, but then move on. I take advantage of their absence and have a good rest, jet lag is beginning to get the upper over my initial enthusiasm and the adrenaline rush. I wander about to take my mind off things for a bit, walk toJerry Moffat's nearby Dominator, then go on to see The Force, Thriller and other five-star milestones. It’s impressive if you consider when these problems were climbed, and even more so if you think that they were done without crash pads!

Evening comes and it’s time for a last attempt. A big group of climbers has gathered around the problem, timidly I ask if I can give it a go, and moments later I’m back up on the mantle… the people down below cheer in excitement and motivate me… this time I control my emotions and push hard on the left sloper and all of a sudden I reach the good crimp for my right hand. I’ve almost done the problem, all I need to do now is control the adrenaline rush on the finishing slab, where I really shake my Wild Climb shoes… and then I’m on top of Midnight Lightning. I can’t have imagined a better first day here in Yosemite!

When I descend twenty or so people I've never seen before congratulate and hug me, I understand that they’re happy for me, it’s fantastic!

It's time to put the crash pads away and think about dinner. I'm in seventh heaven and as I walk back to my tent I happen to meet the legend himself, Ron Kauk. I just can’t believe it! I didn’t think the day could hold even more excitment in store, but evidently I was wrong! Obviously I stop and we chat a bit, he suggests some problems and asks me if I like it here... how could I not like it here!? I reply! Ron also makes some jokes in his good Italian; then, still euphoric, I tell him about my send. He pauses for a moment, I think he sees the enthusiasm in my eyes, he embraces and congratulates me: "Beautiful Filippo!"

We bid farewell and I walk to my tent, incredulous and stunned by this first day at Camp 4. As I try to fall sleep I realise that I’ve made a dream come true and that I’m happy. I’ve got a new story to tell, in front of the fire, perhaps during another trip to Yosemite, or perhaps while climbing somewhere else in the world.

23.06.2017
Monte Limbara and the new trad climbing in Sardinia
The latest trad climbs at Monte Limbara on the North of Sardinia, first ascended by Maurizio Oviglia and Filippo Manca. Oviglia provides the report.

13.05.2015
Luogosanto, Rock & Walls and the bouldering in Sardinia
The report by Filippo Manca about the first Rock & Walls 2015, the Boulder Contest and climbing meeting that took place on 9-10 May 2015 at Luogosanto, Gallura, Sardinia that launched this great new bouldering area.