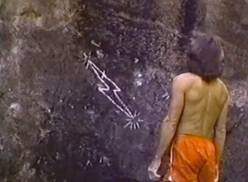 Midnight Lightning bolt, the icon of free climbing in Yosemite disappears for a day

Last week the famous "lightening bolt" on Midnight Lightning in Yosemite Valley disappeared before reappearing the next day.

Excuse the expression, but the news really did come like a bolt out of the blue: during the night the drawing which accompanies the world's most famous boulder problem, Midnight Lightning at Camp 4 in Yosemite, disappeared.

The lightening bolt had been drawn with chalk for the first time by John Bachar while he attempted to free the problem together with John "Yabo" Yablanski and Ron Kauk (Ron subsequently freed it in 1978) and since then the "bolt" has remained in place, in summer as in winter, becoming an icon for free climbing in Yosemite and for those years when everything was still to be discovered. A pictogram which generations of climbers have adored, venerated even, so much so that touching it was considered a good luck ritual prior to attempting to stick the tiny crimps and master that difficult mantle.

A few days ago the lightening bolt suddenly disappeared, washed away in the dark of night... As was to be expected, this action created great disdain in various forums, but it has to be said that some also approved of retuning the Columbia boulder to it’s original state. Should the drawing be considered graffiti? Or an icon to be preserved? While the debate rages, it seems as if climbers have already provided their answer: the lightning was already back in place the next morning!

After the video of Ron Kauk, here's a clip where you can make out the famous lightning bolt and watch Lynn Hill nonchalantly make the first female ascent.