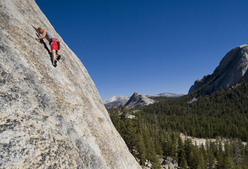 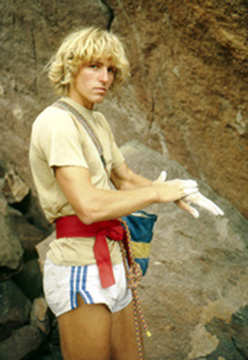 John Bachar, goodbye to a legend

On 5 July John Bachar left us. He was 52 years old and he left us while doing what he could never do without: climbing. Or better still, climbing on his own, without a rope. Bachar was certainly the expression of climbing purity, that freedom to climb alone, without anything else except the mind and body which dances between the air and the rocks. We imagine that this is what it was like on Sunday 10 days ago when he danced for the last time on "his" rocks, on Dike Wall at Mammoth Lakes in California. For the entire climbing community his death is a immense blow, unimaginable, profound.

Bachar was undoubtely a legend. An unreachable and inimitable example. A climbing ace and visionary. Although the comparison between climbers and artists is often abused, in Bachar's case one can certainly state that he was a true artist! And like all true artists, he had an acute sensitivity towards the rocks and life which was completely personal, beautiful, extremely risky and inimitable.

John Bachar was born in a Los Angeles (California) in 1957. He started climbing as a teenager and soon became one of those leading figures who revolutionised climbing in general. He immediately understood the importance of training, so much so that he invented the overhanging Bachar ladder which generations of climbers trained on. Furthermore, he founded a gym between the trees of Camp Four, the most famous climbers' Base Camp in Yosemite... an outdoor training camp which explains much about his irrepressible free spirit.

Bachar was one of the spirits of the Stonemasters, a group which comprised authentic climbing figures such as John Long to name but one. Defining this peculiar club as unoficial, special and strange is saying little. Bachar will be remembered for the speed with which he climbed, his determination and absolute refusal to make compromises. He amazed all with his ascents and he was certainly one of the most significant and well-loved climbers of all times.

We fondly remember John Bacahar playing his sax with his inseparable friend Ron Kauk climbing in the background in Yosemite... How many climbers were inspired by that photo! He represented the ideal of freedom, of art and climbing. This was a dream which Bachar made his own with his life, in great style... inimitable!


John Bachar, some ascents
John Bachar soloed 5.11 when the grade 5.12 didn't even exits. Some of his great solo ascents include Yosemite's first 5.11a, New Dimensions in 1976, Nabisco Wall (5.11c) and Butterballs (5.11c). Literally at the limit of what was possible at the time, these ascents stunned the climbing comunity.
In 1981, together with Dave Yerian, he carried out the first ascent of the daring Bachar-Yerian (5.11c) at Tuolumne Meadows which to this day has remained an important testpiece. That same year he famoulsy offered $10,000 to whoever was capable of keeping up with him in Yosemite for a day. No one accepted the challenge...
In 1986 Bachar and Peter Croft climbed El Capitan and Half Dome in a mere 14 hours, setting both a record time and a trend which to this day is an important objective for the world's best.