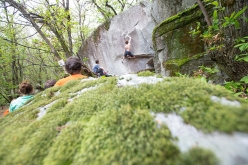 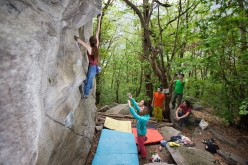 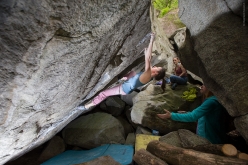 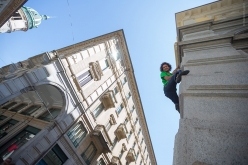 Melloblocco in Tour 2018, thoughts and words

The 15th edition of Melloblocco, the great climbing and bouldering festival that took place from 3 to 6 May between Lugano and Cresciano (Switzerland) together with MBB Street Boulder Lugano, was completed.

In its own way this Melloblocco was beautiful. In its way of being different it was intense. In being on the road (or rather, on tour) it was a continuous discovery, and also held some surprises in store. Some encounters you won’t forget, for example. For this was the first time Mello stepped outside its usual borders. A decision (enforced) that in some ways forced to focus, to test even, the event’s spirit. Because although for everyone it may seem clear and obvious, but sometimes stepping out of a comfort zone, looking at things from another angle, can help comprehend and put things in perspective.

It’s a little like when you travel to touch rock and to test yourself on the other climbers routes, in order to understand what you are doing at your home crags. And Melloblocco, with its famous spirit, has always been about this. It's about climbing as a game. Without boundaries. One that shares experiences (as well as crash pads). Its about meetings, about wanting to know and discover new places. It’s about believing that climbing is a game that takes you far, beyond beyond boundaries (even those at home) and perhaps even goes beyond the numbers, because it sees what unites. In short, it is simply climbing and testing yourself.

In the end it’s always about coming back to the starting point, to the game. And so, with this desire to discover something new, and also to make a virtue of necessity, Mello willingly accepted the invitation and embarked on a journey. And even put itself to the test. On the other side of the border it landed in Lugano - goodbye Lugano bella, says the song of the anarchists - and then in Cresciano. I could tell you about the legendary chestnut forest with its primordial boulders, but that would be superfluous, you probably know it and have probably already been there before. But for those who, like me, happened to be there for the first time, it really was a little magic. Walking up that incredible natural staircase (but which artist built it?). Wandering past such famous boulders. And then reaching, almost by accident, Dreamtime was simple and beautiful. Just as simple and spectacular as the game of bouldering that, gradually, began to come to life on the boulders.

Day after day. Silently the boulderers arrived. As always there was a bit of everything, and more. And, to us, it immediately seemed like the same old Melloblocco. With other numbers, of course. But the spirit seemed the same. Only simple and natural climbing. Which thrives on small inventions. Like the race up the slab, followed by acrobatic stand and cat-like finish that little by little infected everyone. Like the encounters. First of all the one with the Cameroni family. Claudio, the father, one of the undisputed “driving forces" behind Cresciano (along with Fred Nicole and all the other big names in climbing), who amazed you with his calm, wit and hospitality. Giuliano, his son, born in '97, who climbs like only a few can, and who knows how to be a champion even without his immense talent that, for now, has enable him to send 5 (!) 8C boulder problems. He sent 7 of the 8 Cresciano problems, and both blocks in the Lugano Boulder Arena, before failing on the extremely tough Street boulder problem on one of Lugano’s buildings.... And then there is the youngest of the family, Diego, whose love for climbing is unparalleled and whose skill... well he’s a Cameroni!

In these days, among the chestnut trees and the boulder problems at Cresciano, they were joined by their friend Shawn Raboutou (the surname provides a certain guarantee) who in the end sent 6 out of 8 problems. The smiling and explosive Juliane Wurm demonstrated that she hadn’t come world bouldering champion by chance. And they climbed with Annalisa De Marco, Federica Califano, Baptiste Ometz, Jan Zima, Luca Strepparava, Andrea Marinato and the irrepressible Simone Raina, the voice and plenty more of this Mello in Tour. And then, and perhaps above all, there where those who traveled here and overcame boundaries (of all types) just to go climbing. Those who climbed on the problems at the MBB Street Boulder in Lugano. Those who simply partied in the main square of Piazza Lugano. A big shout goes out to all of them, and also to the lake that made us look further still. Because there are paths waiting to be discovered, boulders waiting to climbed, people to be meet and passions to share. What will be lies in the future, in the meantime we’re on a journey. Happy climbing everyone!

30.04.2018
Melloblocco in Tour 2018, instructions for use
Information before the start of the four-day Melloblocco in Tour & MMB Street Boulder 2018 that will take place at Cresciano and Lugano (CH) from Thursday 3 to Sunday 6 May 2018.

25.04.2018
All the beauty and climbing at Melloblocco on Tour 2018
The program, boulders, evenings, games, music, parties and protagonists of Melloblocco in Tour and the MBB Street Boulder, the great climbing festival that will take place from 3 to 6 May at Lugano and Cresciano (Switzerland).