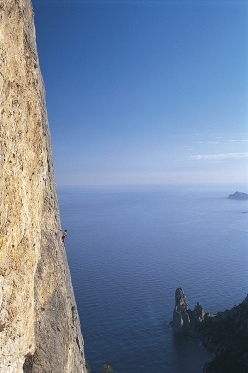 Maurizio Oviglia climbing Mediterraneo up Punta Giradili, 1997. The route was established ground-up in 1996 by Oviglia with Mario Ogliengo and Patrick Raspo
Photo by Mattia Vacca 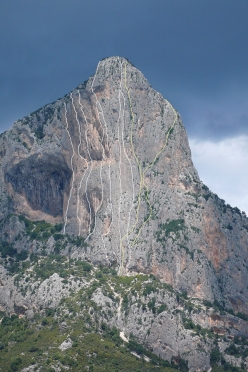 Punta Giradili in Sardinia. Mediterraneo is the climb on the left
Photo by Maurizio Oviglia

Mediterraneo up Punta Giradili, climbing between Sardinia's sky and sea

In this video by Sky Survey System and Alberto Masala discover the magical climbing as it dances between the cobalt sea and Sardinia’s deep blue skies. The set is Mediterraneo, the multi-pitch rock climb first ascended in 1996 up the fantastic Punta Giradili by Maurizio Oviglia, Mario Ogliengo and Patrick Raspo.

In October 1996 the Valle d'Aosta mountain guides Patrick Raspo and Mario Ogliengo and I made the first ascent of Mediterraneo up the southwest face of Punta Giradili. It was the first modern route that tackled the immense Punta Giradili pillar "by fair means", given that the climb Wolfgang Güllich had been bolted on rappel. Mario wanted to call our climb Mediterraneo to emulate and pay homage to the Gallego brothers, who used this name for their major big wall climbs (for example, there’s a Mediterraneo they established on El Capitan).

Nowadays Mediterraneo is one of the most popular routes on Punta Giradili. Although not the most beautiful, it’s one of the easiest and also one of the most exposed: the vertical nature of the climbing really comes into its own. This video by the young Sardinian filmmaker Alberto Masala gives a good idea about the climb’s exceptional setting. (Maurizio Oviglia)