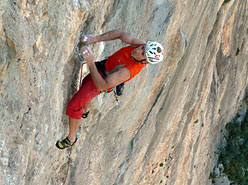 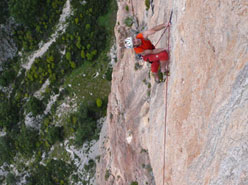 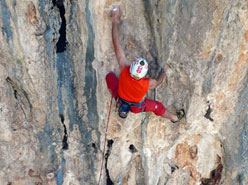 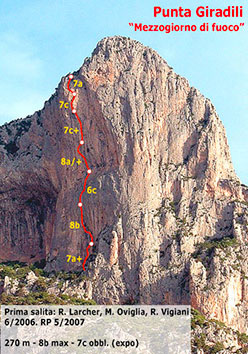 On 6 May Rolando Larcher carried out the first free ascent of Mezzogiorno di fuoco (270m, 8b max, 7c obligatory) on Punta Giradili, Sardinia. The route had been established by Larcher together with Maurizio Oviglia and Roberto Vigiani in 2006.

And the wheels keep on turning. The highly experienced trio Rolando Larcher, Maurizio Oviglia and Roberto Vigiani joined forces at the start of May in Sardinia and freed "Mezzogiorno di fuoco", the seven pitch route they had established in June 2006.

The 270m line weighs in at 8b (7c obligatory) and climbs the overhangs in the center of the fantastic pillar which cuts through the entire wall. Larcher led all pitches after three days working the route. If their description is anything to go by, then Mezzogiorno di fuoco may well become a classic like Hotel Supramonte, another Larcher Vigiani creation which dates back to May 1998 and is still considered a reference point for multi-pitches worldwide.


Mezzogiorno di fuoco
History of a rock face and the latest route
by Maurizio Oviglia
Although Sardinia is known throughout the world for its marvelous crags, it also has enormous rock faces and a mountaineering history which deserves respect. Supramonte, located in the center east of the island, is a wild and fascinating territory which contains kilometers and kilometers of walls, all with perfect rock. The three most important rock faces in Sardinia are located here and are: Punta Cusidore, Gole di Gorroppu and Punta Giradili.


Sardinian and Italian mountaineering history were written on the 700m high Punta Cusidore, while the other two difficult walls host routes from some of the best mountaineers in Europe. The Gole di Gorroppu need no introduction: no doubt all have heard of the super route Hotel Supramonte established by Larcher and Vigiani and repeated by some of the world's best climbers. Punta Giradili on the other hand is a beautiful 400m rock face perched high above the Mediterranean sea. The exceptional climber Marco Bernardi first breached the wall in 1981 with his Via del Carasau, VI+/A3, and the first modern route was added in 1995, unfortunately from above by abseil. This route is called Wolfgang GÃ¼llich (400m, 7a) and many believe that it was he who established the line, but this is incorrect...

This, in synthesis, is the brief but intense history of Punta Giradilli. It seemed as if all had been climbed, but the most striking line resisted. As so often, it was also the hardest since it climbed through the overhangs up the center of the pillar. This difficult and exposed line first saw the light in June 2006 when Larcher, Vigiani and Oviglia tied in to resolve the wall's greatest challenge.

They topped out after fighting for two days against oppressive heat, dehydration, and swollen and painful fingers. All that was left to do was free the route in a single push, but summer was knocking at the door and plans were therefore put off to a later date. In May 2007 the trio combined forces once again and, after three days working the line, Larcher freed the entire route on lead, carrying out the first redpoint on 6 May 2007. Roberto Vigiani redpointed the route as well, seconding some of the pitches.

The route is graded 8b and it is therefore slightly easier than the famous Hotel Supramonte. What remains, apart from the grade itself, is the far more objective fact that this is a splendid and spectacular route, perhaps the best ever from these three mountaineers, at least with regards to their modern multi-pitches. According to Vigiani it will be hard to find another route which so perfectly combines beauty and difficulty... but the last word is never said in mountaineering and, as all know, a mountaineer's latest creation is always the best ever!