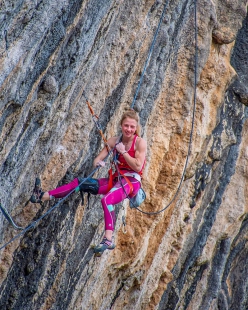 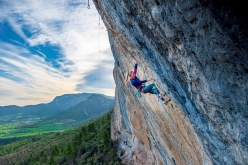 Martina Demmel climbs her first 9a, Joe-cita at Oliana in Spain

German rock climber Martina Demmel has redpointed her first 9a, Joe-cita at Oliana in Spain.

A fortnight after her ground-breaking single day 8b+ onsight and 8c+ redpoint, Martina Demmel from Germany has now taken her climbing to the next level by redpointing her first 9a, Joe-cita at Oliana in Spain.

The never-ending stamina testpiece on the bulging Contrafort de rumabu boasts a staggering 130 moves and is a combination of two existing routes, linking the 8c+ Joe Blau into the 8c+ La Morenita, both of which Demmel had redpointed previously in just 3 and 4 goes respectively. Knowing the cruxes of both routes, the 19-year-old needed a mere 5 more attempts to claim her first 9a.

Speaking to planetmountain.com briefly after her successful, she stated "the route climbs the coolest set of moves and rock in all of Oliana and my redpoint really surprised me. I didn't believe I could improve this quickly, especially since I'd never managed to link it from the middle to the top, where there's a hard slab move. I was certain I'd fall but conditions were just too good! Still can't believe it."

Demmel has only been climbing seriously since 2017 and the speed with which she has achieved her first 9a simply defies belief and sets new standards in climbing - both female and male.

06.01.2020
Laura Rogora 8b+ onsight and 9a redpoint at Montsant and Margalef, Spain
At Montsant in Spain Laura Rogora has managed to onsight her first 8b+ while at Margalef she redpointed the 9a La Bongada.