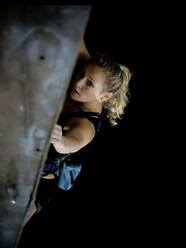 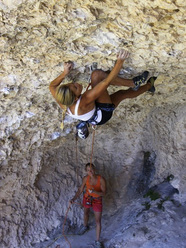 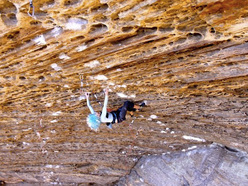 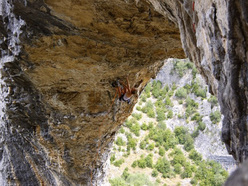 Interview with American climber Sasha DiGiulian after her cutting-edge 8c+ redpoints of Southern Smoke and Lucifer and her 8b+ on-sight of Omaha Beach, all at Red River Gorge, Kentucky, USA.

We'll admit it: Sasha DiGiulian took us by surprise. We'd watched the young American compete in last year's Arco pre-World Championship event, but nothing could have prepared us for what happened this March: in the space of just a couple of days, the 18-year-old entered the highly restricted club of female climbers who have redpointed 8c+, just three days later she entered the even more exclusive realm of women who have on-sighted 8b+ - a performance which also for men is by no means easy or something which can be taken for granted. Both these were created by Josune Bereziartu (with Honky Mix 8c+ in 2000 at Onate and Hidrofobia 8b+ in 2006 at Montsant in Spain) and while the list has grown since then, as yet it has not yet witnessed the same explosion as the men's equivalent.

DiGiulian has been climbing for eleven years and her astonishing run took place on two massive stamina endurance routes in Kentucky's Red River Gorge, Southern Smoke 8c+, Omaha Beach 8b+ as well as the fingery and boulderyLucifer 8c+. The former had been first ascended in 2008 by Joe Kinder, while Omaha Beach had previously been on-sighted by one of America's most talented female climbers, 18-year old Katie Brown in 1999: since then holds have broken, bringing the grade up to solid 5.14a (8b+). And yesterday, after falling off the last hard move and rain stopping play, DiGiulian also managed to redpoint Mike Doyle's powerful Lucifer 8c+. Same crag, different style. DiGiulian is obvioulsy on a role.

Seeing that we didn't want to be caught out once again, we thought we'd find out more from the 12th grade student who plans to take a year off to go climbing before attending Columbia University in NYC. Enjoy this interview with one of America's blondest and strongest...

Sasha, your first 8c+... how do you feel?
I am very excited! I believe that this route fit my style well and I really enjoyed the climbing, it's a beautiful line.

How much did you have to give to make the send?
I felt great actually, I didn't feel too tired when I sent it. Southern Smoke climbs very fluidly, it's a pure stamina-oriented route with no really distinct cruxes, just many difficult moves back-to-back with no great rests. I was a little shocked when I sent it I think because I did it much faster than I anticipated.

Your previous hardest is one 8c. That's a big leap... what can you put this down to?
I just tried Southern Smoke because it's an inspiring line. I had never tried another 8c+ before, nor another 8c than Welcome to Tijuana in Rodellar. I think each route is quite individual and clearly this one was fitting to my style. I feel as though my climbing is progressing, as I gain experience - especially through climbing outside more - I learn more about my capabilities and how to push my limits more and more. Before I was a little intimidated by high grades but now I have learned that I shouldn't be limited by numbers. I have learned to just go for it.

Female 8c+ was first done by Josune Bereziartu in 2000, 11 years ago...
I believe that many more women are capable of climbing this grade, they just need to overlook numerical boundaries and go for it. It is very inspiring to see the sport progress so rapidly, women and men are accomplishing harder and harder routes each year and this is great. I also love to see so many people impassioned by climbing!

Just the other day you surprised us - and perhaps yourself even - with an 8b+ on-sight. How did this come about?
Omaha Beach is a route that I’ve always wanted to on-sight one day, so I was very happy that when I chose to go for it yesterday. I was in shape enough to successfully send it first try. I’ve never tried to on-sight any other 8b+ before, I just knew that this route was a relatively straight-forward, fitness-oriented so I thought that if I climbed well, I had the capability of doing it.

So you'd deliberately left Omaha Beach for a possible on-sight. How much of your climbing is programmed, and how much left to spur-of-the-momoent decisions?
Yes, I had refrained from watching or trying it because I always dreamed of doing the on-sight. Not much of my climbing is programmed like this – outside I generally like to hop on whatever I feel like at the time - saving routes isn’t normally something I do but I just had a gut feeling about Omaha Beach that if I waited and was in good enough shape, I could on-sight it. So I garnered a bit of patience and eventually succeeded.

And now, fresh off the press, Lucifer 8c+
Yes, I sent Lucifer today :) I had fallen on the last hard move yesterday and kept my fingers crossed for some good weather! I shed some blood and tried hard! I'm very excited!

You've been concentrating mainly on sport and competitions. But climbing has many facets...
I do boulder, though primarily in competitions because whenever I have the chance to go climbing outside and have to choose between a bouldering trip and a sport climbing trip, I am more keen on doing routes. I am also interested in trad climbing, but for now I am more psyched on sport climbing.

What is your aim for the 2011 competition season?
I am very excited to train hard and compete in some of the World Cup Circuit competitions. I would love to do well in the World Cups and at the Arco World Championships. And I'm reallyenthusiastic about climbing outside and travelling to new destinations.