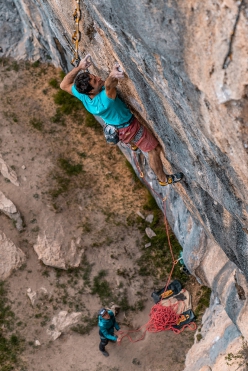 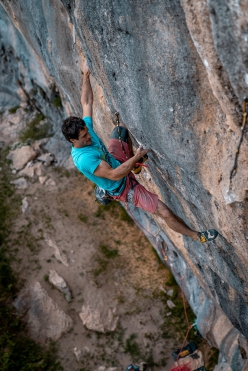 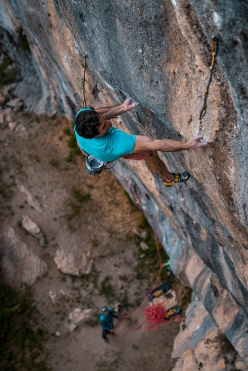 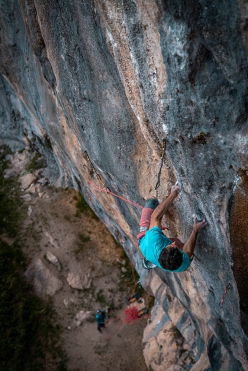 Marcello Bombardi makes no mistakes on Lapsus at Andonno, Italy

Two days ago at Andonno in Italy 27-year-old Marcello Bombardi made the third ascent of Lapsus, after Stefano Ghisolfi and Adam Ondra.

Two days ago Marcello Bombardi redpointed Lapsus, the heinous testpiece freed at Andonno in 2015 by Stefano Ghisolfi, repeated in 2017 by Adam Ondra and famous for being Italy’s first 9b. The 27-year-old provided full details about his ascent on his social channels and, coincidentally, holding Bombardi’s ropes on his hardest climb to date was Ghioslfi himself.


LAPSUS by Marcello Bombardi
Lapsus was the first Italian 9b climbed by Stefano Gisolfi in 2015 and despite being relatively close to home I had never took it in consideration. I've always seen it as too long and extreme for me.

Last autumn, with more courage after a productive trip to Flatanger and thanks to some time available for a winter that looked poor in competitions and foreign trips, I decided to take Lapsus as a long term project. But I didn't mean that long very long for my mental tolerance to try the same route.

It has been a long adventure, the longest I have spent so far on a single route and it has put me to the test. From believing to be able to do it quickly, to changing the method too many times to find the most efficient one, to walking to the crag with snowshoes and half a meter of snow to take advantage of the last days of the winter season, to returning to spring and fall on the top several times on the same move, to losing enthusiasm due to skin pain caused by the very abrasive rock of the first part of the route, to getting with the final jug in front of the eyes but not being able to pull and grab it and, yesterday, to finally be able to commit the final jump and clip the chain.

I will tell more about this adventure and there will be a nice video... for the moment a special thanks to all the friends who shared the days at the crag, to share joys and sorrows, mental and physical.

About the grade... Lapsus was freed as 9b and repeated by Adam Ondra who considered it an easy 9b. Trying the route I was able to find and use a kneebar that allows to recover before the last final boulder problem. It is not easy to hold the tension and release some weight, especially coming from below with a tired leg, but I think it could take away the full grade of 9b.

Anyway, what matters most to me was the experience and the battle with the route. He challenged and taught me a lot and I would do it again, with or without the b.

21.04.2017
Adam Ondra repeats Lapsus at Andonno, second 9b in two days
Czech climber Adam Ondra has made the first repeat of Lapsus, the 9b sport climb freed by Stefano Ghisolfi at Andonno, Italy. This is Ondra’s second 9b in just two days, after his first ascent of Queen Line at Laghel (Arco). Ondra ended the day in style by making a second-go redpoint of a 9a at the crag Castelbianco.