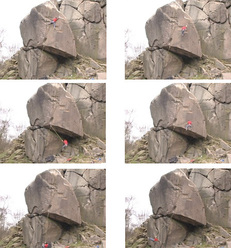 Kevin Jorgeson carries out the second ascent of The Groove, Cratcliffe Tor, England, while continuing his gritstone raid together with fellow American Alex Honnold.

As previously reported, the extremely talented American climbers Kevin Jorgeson and Alex Honnold have taken England's gritstone by storm, climbing an unprecedented number of extreme testpieces whilst dodging the rain during their British raid.

The latest illustrious route to fall victim to Kevin Jorgeson is The Groove, James Pearson's testpiece at Cratcliffe Tor which he climbed in February this year at E10. Jorgeson spent 4 days in total and chose to repeat the Groove with a variation finish, exiting up the classic Fern Hill instead of following the top arete. Just like Pearson though he climbed without crashpad at the base, describing it as an "amazing, unique and rewarding route." What is noteworthy is that after the successful second ascent, Jorgeson chose to test the line and take a fall from the worst possible place... his conclusion: safe and hard.

We've compiled a short (but by no means exhaustive) list of some of the most signifcant ascents carried out by the American duo. What needs underlining is not so much the apparent ease and speed with which these routes were climbed, but rather the pure talent, technical ability, commitment and, why not, luck needed to escape unharmed from these routes where danger should never be underestimated.