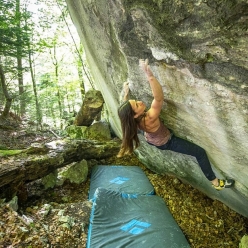 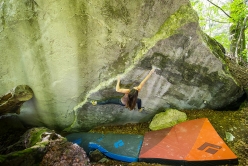 On 14 May Katrin Kaddi Lehmann repeated Kryptos, an 8C boulder problem at Morchelstock in Switzerland. In doing so she has become only the second woman to climb this grade after Ashima Shiraishi.

German climber Katrin Lehmann has taken the climbing world by storm with her repeat of Kryptos, a boulder problem in the small Morchelstock bouldering area in the Swiss Jura established in 2009 by Franz Widmer and graded 8C. In repeating the line, Lehmann has become only the second woman to climb this grade after Ashima Shiraishi sent Horizon at Mount Hiei in Japan in 2016.

Kryptos follows an obvious limestone seam and had previously been repeated by Swissmen Fred Nicole and Kevin Heiniger. Lehmann set her sights on the problem in March 2017 and although she found the moves impossible at first, she stuck to it. As temperatures increased this May she often spent 2 hours driving from Freiburg in Germany where she works as an instructor and route setter in a climbing gym, reaching the problem late at night in order to get up at 6 am and try the moves before driving back to work the next day. She sent the problem on 14 May; surprisingly for the magnitude of this ascent, the news of this repeat broke only recently.

Prior to Kryptos Lehmann’s previous best was 8B, with the classic Rocklands testpiece Fragile Steps which she sent in 2015. The leap from 8B to 8C is absolutely gigantic and the drive and commitment that led to Lehmann’s successful ascent are evidently as outstanding as the actual physical performance.