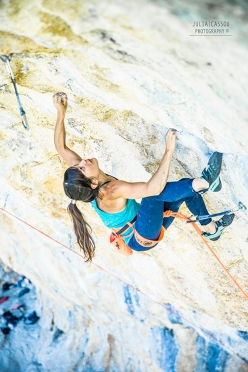 Katherine Choong climbs her second 9a, Jungfrau Marathon at Gimmelwald

Swiss climber Katherine Choong has redpointed Jungfrau Marathon at Gimmelwald in Switzerland. This is her second 9a after Cabane au Canada at Rawyl in 2018

Katherine Choong from Switzerland recently came up trumps on her project at Gimmelwald in Switzerland’s Bernese Alps, Jungfrau Marathon. Choong first attempted this 9a in October 2018 and after working out the beta actually came surprisingly close to the repoint, only to be stopped by November snowfall. Poor weather in spring and sweltering conditions in summer hampered progress but this October, after modifying the crux sequence slightly, she finally clipped the anchors.

"It was a memorable day" stated Choong "surrounded by many friends who encouraged me, sharing this moment with them made it even more special. When I clipped the chains, it was first of all an explosion of joy. The joy of having once again exceeded my limits physically but above all mentally. All the effort, the time invested, the sweat, the frustration finally made sense. "

In 2018 the 27-year-old law graduate became the first Swisswoman to send 9a with her repeat of Cabane au Canada at Rawyl. This name may ring a bell to some readers as it was on this route that Adam Ondra secured his first 9a onsight, back in July 2013, just three months after Alexander Megos claimed the world’s first 9a at Siurana in Spain.

Choong was introduced to climbing at at early age and after winning her category of the Junior World Championship in 2009 continued competing successfully. Her best result as a senior was 7th in the Kranj stage of the 2018 Lead World Cup. Having redpointed numerous 8c’s and a handful of 8c+, earlier this year she climbed on the Eiger where she managed to onsight the classic alpine testpiece Deep Blue Sea. With She Mathilde Becerra she attempted Tarrago 8b+ in Monsterrat and, more importantly, took part in Lebanon’s second Beqaa Bouldering Competition organised by ClimbAid.