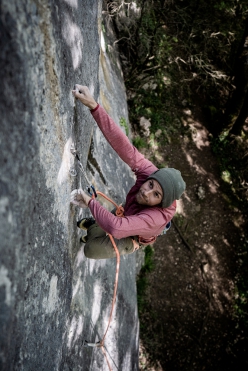 Jonas Schild sending Bain de Sang at Saint Loup in Switzerland. This classic 9a was first ascended by Fred Nicole in 1993.
Photo by Daniel Bleuer 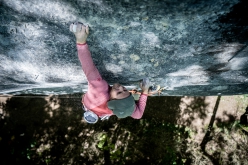 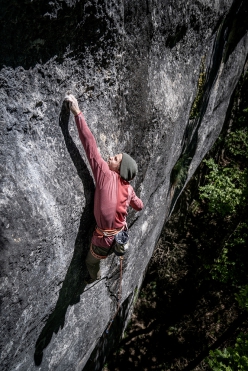 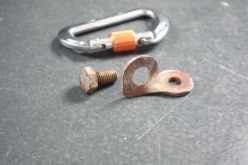 On 4 May 2021 Swiss mountain guide Jonas Schild repeated Bain de Sang, the classic 9a at Saint Loup in Switzerland first ascended by Fred Nicole in 1993.

Bain de Sang at Saint Loup in Switzerland is one of the few 9a’s in the world that instead of being wildly overhanging is actually a nigh vertical slab. First ascended by local Fred Nicole in 1993, it is on this extremely technical 25m test with its boulder crux finish that Basque climber Josune Bereziartu became the first woman in the world to climb 9a with her milestone repeat in 2002. Although the route was freed almost three decades ago, redpoints are still a rare occurrence and the most recent repeat was carried out on 4 May by Swiss mountain guide Jonas Schild, who provided the following report.

BAIN DE SANG - VERTICAL LOVE by Jonas Schild
I started trying the route seriously last autumn. Because of the old and rusty bolts (old hand-placed bolts from the 90s) I only tried the climb on a toprope. Unexpectedly, after just a few days I managed to climb the entire route on toprope, so the plan was clear: rebolt the route and then lead it. But bad weather set in and the stayed wet for a long time.

In mid-November I was finally able to try it and lead it with new bolts. My first attempt went really well and I fell on the last difficult move. On my second try though my ring finger suddenly made a loud popping sound. Diagnosis: torn ring ligament. Not particularly surprising when you consider that I was trying to lock a mono as a full crimp.

The injury forced me to take a longer break from climbing, and after a winter with practically no sport climbing at all, I decided to try the route again this spring. Amazingly, the sensations were really good right from the start. Because of my lack of fitness I fell from the last crux numerous times, and at one point I thought I’d run out of time and that it would become too warm for serious attempts.

But at the beginning of May luck was on my side. On the day of my send a strong wind made conditions were just perfect and I finally managed to clip the chains of Bain de Sang. A supposedly short matter turned into a somewhat longer story. At least with a happy ending though!