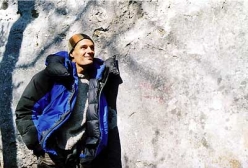 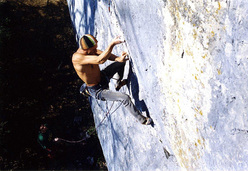 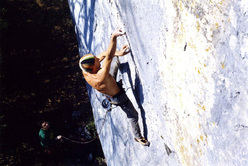 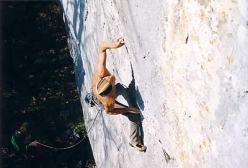 Last Friday Alessandro Lamberti repeated Fred Nicole's Bain De Sang at Saint Loup, Switzerland. The 9a slab route, first climbed by Fred Nicole in 1993, is Lamberti's second 9a after Hugh, and his 26th route route between 8b+ and 9a. Lamberti's ascent is the seventh repeat, after François Nicole, Fred Rouhling, Cederic Bersandi, David Hohl, Josune Bereciartu and Iker Pou. He sent us the following report:

The route
I remember that when I climbed "Hugh", a really physical 9a with a footless start, I was extremely tense: the next day I had to return home, I had a 1600km drive ahead of me and I didn't know if, and when, I would return. So I started to climb with my heart pumping and my stomach completely upset - despite this I managed to send the route, almost as if I was angry. Bain de Sang on the other hand needs much more fine tuning and coordination, it has to be climbed more serenely and with less rage: the psychophysical level needs to be reduced significantly. During my first attempt this didn't happen, my foot slipped practically when it was all over: “the knowledge of oneself is the major obstacle to executing any physical action" is what Bruce Lee once said…

For an hour I waited for the right state of mind. I tried, as usual, to think about the result of my next attempt, and when I set off again I let myself go autonomously and automatically; power, perfectly executed moves, energy flowing through my body, without my mind meditating, brought me up to the chain. Nicola who was belaying me was probably more excited than I was and FranÃ§ois Nicole, who had made the first repeat, got so motivated that he sent the hard project he'd been attempting for a while. On Saturday and Sunday the weather changed and it got hot. I had finally chosen the right moment.

The grade
I don't know whether Bain de sang is really 9a. What is certain is that it is hard, both because of its 7c boulder crux and for the fact that - and this is important from a psychological point of view - that this crux is right at the end of the route. Add to this that "Bain" doesn't have any fast repeats, unlike other 9a's such as, for example, The Fly, Cinematix, or Elfe. Iker Pou, who repeated Elfe in two days, needed lots of time to send Bain de Sang. What is likely is that this is a 9a at the bottom end of this grade: i.e. an "easy" 9a if compared to, for example, Action Directe.

The current grading problems stem from the fact that our scale has too few levels. We have to squeeze in an infinite number of differing routes between 4a and 9a, and this results in routes being hard or easy, without necessarily being graded differently: I can easily think of ten 8a routes close to home that can be ordered according to their difficulty, from 8a,1.. 8a,2..8a,3.. etc. Some are easy, some slightly more difficult, some hard, and all are 8a. In this way, between a 9a,1 (Bain for example) and a 9a,9 (Action Directe for example), there's almost a grade between them, despite the fact that they are both the same grade.”