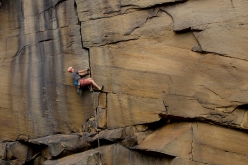 Blind climber Jesse Dufton has repeatedly featured in our news reports. The first when he climbed The Sloth at The Roaches, an ascent described by those in the know as redefining the word "impressive". The second report was after climbing The Old Man of Hoy, considered so extraordinary that the feat was mentioned during a session of Scottish Parliament.

Earlier this year Dufton managed to fulfil another life dream: raising the stakes and climbing his first E2. The route Dufton chose was the famous Forked Lightning Crack at Heptonstall Quarry, an ultra-classic trad climb first ascended by none other than Don Whillans in 1961.

As to the grade E2, this indicated a route of considerable difficulty. Dufton completed it, as he himself jokes, "nonsight", ie. guided by his partner Molly Thompson. Here’s footage of this inspiring ascent.