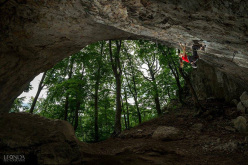 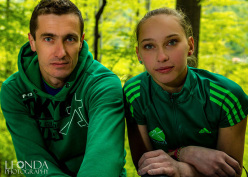 Hailed as one of most promising athletes of her generation, Janja Garnbret from Slovenia has set a new personal best by redpointing Miza za šest last weekend at Kotecnik, the biggest crag in her home country.

The route in question is a link-up of two existing climbs Garnbret had redpointed previously, namely Adrenalin 8b and Katakombe 8b+, and in order to send this her first 8c+ the 16-year-old needed a mere 4 attempts spread out between last weekend and the summer. It goes without saying that the speed of this ascent is nothing short of remarkable and indicative of greater things to come.

In March this year Garnbret, aged a mere 15 at the time, made a impressive 8b onsight and also climbed her first 8c, yet her main focus at present is on competitions. After winning both her category European Bouldering and Lead Championships titles in 2014, she doubled her takings at Arco this September by winning the Lead and Bouldering Youth A World Championship titles. Furthermore, during her rookie season in the senior World Cup she placed second at the European Lead Championship at Chamonix in July and second at World Cup in Imst.

It's clear that many eyes will be on Garnbret on the 14th and 15th of November, when the Lead World Cup celebrates its traditional last stage in the small Slovenian town of Kranj. The race for overall victory is still wide open and although Gautier Supper and Mina Markovic currently lead the provisional rankings, their margin is small and Adam Ondra, Jacob Schubert, Domen Skofic, Romain Desgranges, Jain Kim and Jessica Pilz all stand a chance of victory. Who knows what Garnbret, in her third senior World Cup appearance this season and competing in front of the home crowd, might achieve.