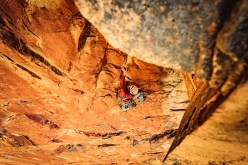 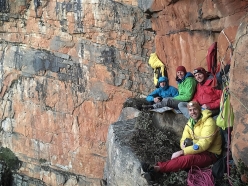 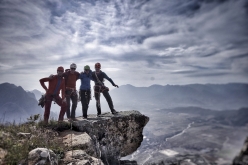 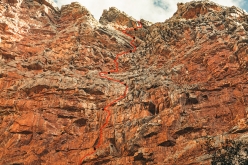 The spectacular overhanging amphitheater Slanghoek Peak in South Africa's Du Toits Kloof Mountains was long considered one of country's last great climbing problems. In 2002 the local climbers Hilton Davies, David Davies and Mathew Sim finally set the record straight by establishing A Private Universe, the first route through the enormous face. 550m high with difficulties up to 7a and A1 and protected by 100 bolts, the line was later freed by Englishman Dave Birkett and South Africa’s Tinie Verseveld with difficulties up to 7b+. Last month Slanghoek Peak received its second route, established ground-up and trad by Germany’s Ines Papert and Joseph Pfnür, Slovenia’s Luka Lindič and Canada’s Paul McSorley.

After having repeating A Private Universe, the international team set to work on climbing their Ruby Supernova via a series of corners on the righthand side of the face. Working as two teams of two, they climbed onsight to within 100 meters of the summit before being caught by "the storm of the century" as Papert recounts. While it snowed in the mountains, mature trees were smashed "like toothpicks" and the storm caused "widespread flooding throughout the Western Cape of South Africa."

The climbers fled to Rocklands and Montague and returned a week later to complete the climb. They repeated the previously established pitches and after a bivouac on the face reached the summit and abseiled down the line of the route. The 13 pitches breach 520m of climbing with difficulties up to ED1 7b+ (VI 5.12c). No bolts were placed and the rock, an excellent quality quartzite, proved ideal for nuts and friends. Only a handful of nuts and pegs were left behind at anchors for rappells.

After a short visit to Table Mountain the team returned home, convinced that South Africa offers not only some of the finest adventure climbing they’ve ever done, but that it also holds enormous potential for exciting new routes.

18.03.2010
Climbing in South Africa around Cape Town
Tony Lourens, the editor of SA Mountain Sport Magazine, shares the delights of rock climbing around Cape Town at the tip of Africa.